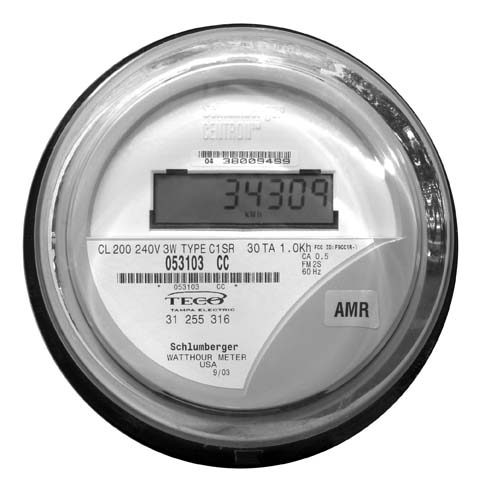 Recently, I had the opportunity to measure the RF Radiation coming from an ITRON C1SR in Summerland, British Columbia, and the results were quite alarming.  This is an Automatic Meter Reading (AMR) type of meter. This type of meter has been reported to being used in Nelson and Grand Forks BC.
This C1SR meter transmits a spike of radiation that contains the current kWh reading of the meter every 30 seconds.  This is done so that a Meter Reader with a receiver can drive by any time and can get the reading without having to wait very long.  This time between transmits may be changed by the operator but they have to walk up to the meter and use a direct connection to the meter to do that.  It seems that the meters in Grand Forks are also transmitting at 30 second intervals.
The measurements that I made from the front of the meter in Summerland at a distance of 2 meters ranged from 500 to almost 900 microwatts per square meter ( µW/m²).  This, is quite high when measured at 2m.  The radiation at 1m would be significantly higher.  If this meter were on the side of a house next to a bedroom or kitchen then I would be very concerned.
I used a GigaHertz  HF59B radiation meter and recorded the output on a GigaHertz NFA1000.  Here is what I recorded: You can see that all spikes were not the same power (I do not know why) but the spacing was almost exactly 30 seconds.
I have also recorded the output of Itron Smart Meters and found that the radiation spikes were similar in strength (amplitude)  but the number of spikes were significantly less than the C1SR meters.
Thus, if you believe that each spike from a digital meter is harmful and the radiation damage is cumulative, then you must conclude that the Itron C1SR and similar AMR meters are capable of serious health impact similar to that of Smart Meters.
Share |
Previous Post
Next Post
comments powered by Disqus