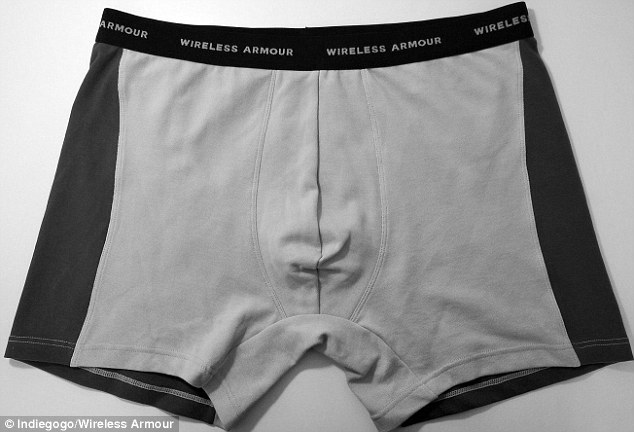 Carrying a phone in your pocket all day may seem harmless, but there's a growing body of evidence linking devices to impotence, infertility and low sperm count.
Concerned about the health of his 'little swimmers', a physician from London created a range of underwear fitted with silver 'cages' to protect them from radiation.
The mesh of silver is woven into the fabric of the pants and shields the wearer from electromagnetic rays from phones, tablets and other devices - creating a so-called Faraday cage.
Faraday cages, named after inventor Michael Faraday, are used to protect electronics from interference by blocking the current.
For example, systems in parliament, banks and stock market servers are protected by the technology.
In the Wireless Armour range, thin threads of silver are woven in with cotton during the production stage.
This strengthens the underwear, but also makes them antimicrobial, protecting them from bacteria and keeping them smelling fresh.
Each pair has approximately 20 per cent silver woven into the fabric.
Wireless Armour underpants are available in two styles - tight-fitting Boxer Briefs or loose Trunks.
There are then two versions of each - either a 360 model which protects from radiation in the front and back pockets, or an 180 model that only provides protection on the front of the body.
Wireless’ Armour’s Faraday cage fabric has been independently tested and was found to shield 99.97 per cent of Wi-Fi radiation. 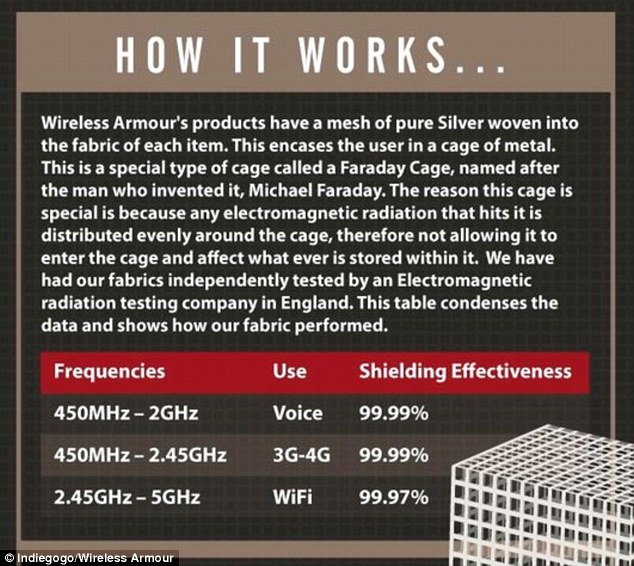 Physics graduate and CEO Joseph Perkins, 26, has now launched an Indiegogo campaign to fund production of his underwear range, and expects products to go on sale by July this year.
The pants are expected to retail for £35 ($58), but campaign backers can get a pair for £14 ($23).
Perkins is looking to raise £30,000 ($50,000) and has so far achieved just short of £400 ($672).
The campaign runs until 28 May and has been verified by Indiegogo as a genuine product.
Perkins said: ‘Wireless Armour is designed to protect the health of a wireless generation glued to their mobile devices.
'We are exposing ourselves to unprecedented levels of electromagnetic radiation and this is showing with our declining sperm counts and increasing cases of cancer.
‘Although the evidence is not conclusive it is piling up. Our goal is to make protection as easy as getting dressed!’
Last month, scientists found men who hold their mobiles for more than four hours a day are more likely to suffer from impotence than those who limit usage to less than two hours.
For the study, researchers recruited 20 men who had experienced problems with erectile function in the six months prior to the study.
They also studied 10 healthy men with no history of dysfunction.
The men who had previously suffered from erectile problems were found to carry their devices for a ‘significantly longer time’ than the healthy men - 4.4 hours a day compared to 1.8 hours a day.
This backed up the findings of two other, separate studies in Egypt and the U.S. from last year.
Both studies found a 'worrying link' between poor sperm and the number of hours a day a man uses his mobile phone.
However, all the researchers said more needs to be done to establish what causes the problem and the extent of damage mobiles can cause.
Share |
Previous Post
Next Post
comments powered by Disqus