Are Cell Tower RF Emissions Something to Worry About? 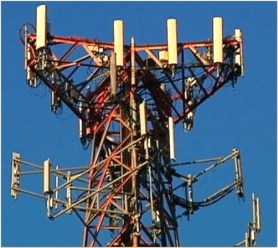 This article was prompted by an opinion piece in the Naperville Sun on July 30, 2014, entitled, “We should worry about things that are truly dangerous.”  The writer of that piece is certainly entitled to his opinion, but in this article we would like to clarify some of the “facts” as well as highlight the somewhat snobbish nature of the Naperville Sun editorial.
The general theme of the opinion piece was that parents should not worry about such things as radiofrequency (RF) emissions from cell towers being proposed for placement on school properties, but instead they “should worry about [other] things that are truly dangerous,” such as use of antibiotics in livestock and chemicals used in the plastic lining of food and beverage cans.
Snobbish Opinion
My first point would be to mention how the expressed opinion disparages the health concerns that parents might express about cell tower emissions as if the parents are not also concerned about scores of other issues that face parents each day, such as healthy food, safe streets, sunburn, mosquito bites, childhood diseases, inappropriate online content, etc., etc.  The article characterizes the parents’ concerns as an irrational “fear” and “fret[ting] about radio waves” based upon a “vast ocean of lies, manufactured fear, and superstition.”
The article mentions that the school “should tell parents to stop worrying about things that are not dangerous…”
What type of school would we have that did not listen to and thoughtfully consider the concerns of the parents?  Would you want to send your children to such a school?
Biased and Erroneous Opinions
Editorial Opinion #1
“… there is zero scientific evidence they [radio waves] cause health problems and, because of their wavelength, few if any scientists who think they could.”
Facts and Counterpoints
By any standard, there is at least limited evidence that RF emissions negatively affect health, and there are many scientists who believe that the exponential and uncontrolled expansion of the wireless industry poses a serious threat to human health and the environment.
Some of the scientific evidence dealing specifically with cell tower emissions was presented in a previous article at this website: “Naperville School District 203 Considers Leases for Cell Tower Installations.”
Those who say there is “zero evidence” of harm typically view the issue as an “all or nothing” proposition.  In an attempt to better illustrate this concept, refer to the figure below showing a “ladder” with various degrees of possible certainty for demonstrated adverse health effects from RF exposure.  Those individuals who say there is “no evidence” are stuck at the bottom of the ladder stating that talk of low-level health effects from RF emissions is nothing more than “speculation.”  These same people further state that in order to take any action to protect the public you must find a way to jump to the top of the ladder showing absolute proof of harm including the mechanism causing the harm. 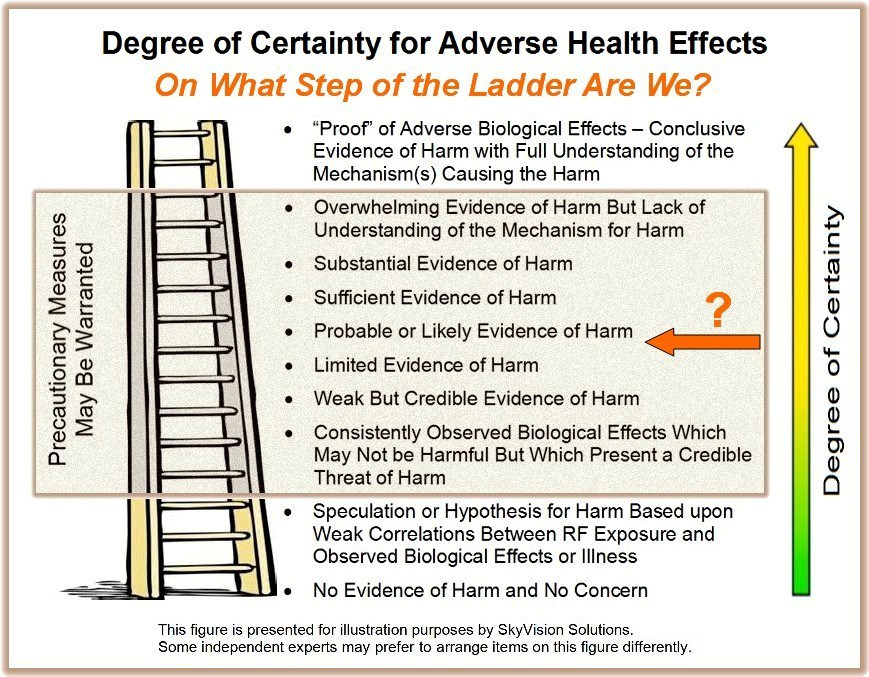 Those individuals advocating caution acknowledge that at least limited levels of evidence exist demonstrating that adverse health effects are caused by RF emissions.  Some scientists and independent experts believe we are further up the ladder than others. Between speculation and hypothesis toward the bottom of the ladder and absolute proof at the top of the ladder is a range where precautionary measures may be warranted based upon an objective review of the available scientific evidence and its possible negative impact on society if nothing is done to avoid harm.
The most basic precautionary action is to avoid RF exposure that is higher than necessary to achieve an intended purpose.  If a school’s primary objective is to educate children in a safe manner, then intentionally exposing children and school personnel to cell tower radiation should certainly be viewed as not supporting the school’s core objective.  Such exposure can therefore  be declared unnecessary from a health risk perspective.
Editorial Opinion #2
“the RF levels under an antenna are thousands of times lower than recommended levels, and only 1 percent of what the kid would get from his own cell phone.”
Facts and Counterpoints
There are at least three fallacies or straw man arguments in the above statement:
Conclusion
The Naperville Sun opinion piece mentions that schools are hopefully “one of the few remaining islands of evidence-based rationality…”  The point of this article is that it is totally rational for the school to listen to concerned parents, … and that on the subject of cell tower radiation emissions on school grounds, several knowledgeable and informed parents are trying to do what is best for their children and the community.  In addition, from the information presented in this blog article, their concerns and “fears” appear to be “evidence-based.”
Share |
Previous Post
Next Post
comments powered by Disqus