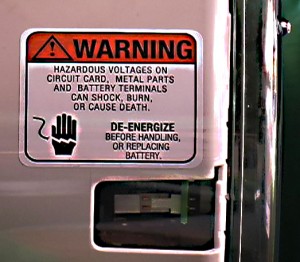 Just When You Thought It Was Safe to Opt-Out
Ironically, now that PG&E is offering to disable the wireless RF function (for a hefty price) in their smart meters, we find that there’s an another extremely critical problem with the meters.
Just when you thought you had mastered all the esoteric acronyms, and all the problems with ‘smart’ meters, here’s one more: Switching-Mode Power Supply or SMPS. This new element in the ‘smart’ meter controversy deserves immediate full official and public attention.
In our on-going investigation into why so-called ‘smart’ meters being installed by PG&E against rising public opposition are causing so many people to be sick, and so many problems with other electric and electronic equipment, we have been fortunate to obtain the advice of electrical engineers.
On examination of typical meters, including ABB, GE, and Landis Gyr, they report that, in addition to its RF transmitter, each wireless digital meter also has a component called the ‘switching-mode power supply’ (SMPS) – switching power supply for short. Its function is to ‘step down’ the 240v alternating current (AC) coming in from the utility pole power lines to the 2 to 10 volts of direct current (DC) required to run the meter’s digital electronics which record the electricity usage data.
The SMPS function emits sharp spikes of millisecond bursts constantly, 24/7. The SMPS on the OWS 514 NIC model, for instance, which is the smart meter model widely installed by PG&E throughout its territory, has been measured to emit spikes of up to 50,000 hz and higher. This constant pulsing of high frequencies, in addition to the RF function, is causing not only interference with other electric and electronic equipment in many homes with smart meters installed, but also is causing havoc with biological systems in its field of exposure. (see wikipedia and Prevention Magazine articles below)
Dirty Electricity
When current flows through the wiring of a building it generates a surrounding electro-magnetic field that radiates outward all around the wires at right angles to the direction of the current’s flow and reaches out into the room.
It is well known that switching power supplies can generate spikes of so-called electromagnetic interference (EMI), or high frequency transients, which then travel along the wiring in the walls, radiating outward in the wiring’s electromagnetic field.
Such spikes are known as ‘dirty electricity’ and can be conducted to a human body that is within the range of the radiating field. This function is on all smart meters used by all utilities and is on constantly, 24/7.
[For more on dirty electricity check out Dr. Sam Milham's website and his new book, DIRTY ELECTRICITY: Electrification and the Diseases of Civilization and watch this blog for our in depth interview with Dr. Milham - coming soon. ]
One of the engineers explains it this way:
“Extensive measurements have demonstrated that all of the meters measured so far, including ABB, GE, and Landis Gyr, emit noise on the customer’s electric wiring in the form of high frequency voltage spikes, typically with an amplitude of 2 volts, but a frequency anywhere from 4,000 Hertz, up to 60,000 Hz. The actual frequency of the phenomena is influenced by the devices that are plugged into the customer’s power. Some houses are much worse than others, and this observation has been confirmed by PG&E installers that have talked to us.”
Wikipedia agrees that SMPSs have this drawback:
“Disadvantages include greater complexity, the generation of high-amplitude, high-frequency energy that the low-pass filter must block to avoid electromagnetic interference (EMI), and a ripple voltage at the switching frequency and the harmonic frequencies thereof.
Very low cost SMPSs may couple electrical switching noise back onto the mains power line, causing interference with A/V equipment connected to the same phase. Non-power-factor-corrected SMPSs also cause harmonic distortion.’ ”
Another Fatal Flaw in ‘Smart’ Meters
Our consultants believe that it is this ‘dirty electricity’ generated by the e-meters’ switching power supplies that is a major contributor to the symptoms being reported by growing numbers of people in association with the e-meters thus far installed.
The ‘opt-out-for-a-price’ arrangement put forward by PG&E, in which the wireless meters would, at the ratepayer’s expense, have its RF transmitting function turned off, would still not eliminate the ‘dirty electricity’ flowing into the buildings wiring, and so would not prevent negative health effects in the buildings’s occupants.
This is further reason for the CPUC to declare a moratorium on e-meter deployment, and schedule a fully transparent public hearing on all aspects of the meters’ operation.
Share |
Previous Post
Next Post
comments powered by Disqus