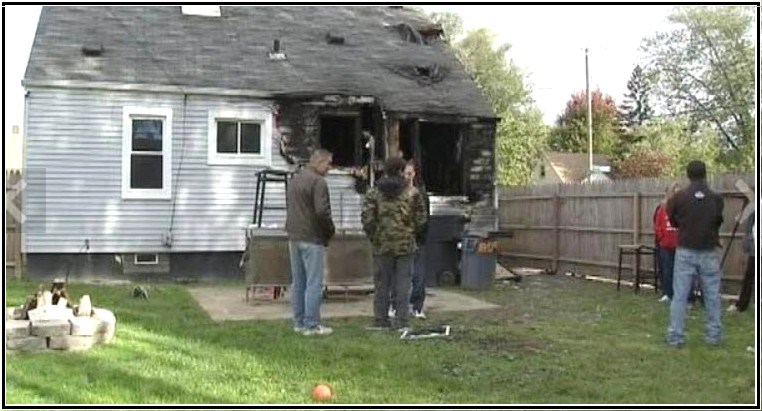 A couple barely escaped a house fire with their lives in Detroit, Michigan, early Sunday morning, October 5th, 2014.  Sadly, their two dogs were killed in the blaze.
The homeowner blames the recently installed smart meter for the fire. “It was DTE … why my dogs are dead, why my family is ruined, why I have no house, why I have nothing.”
Investigators from Detroit’s Fire Department say two circuit boxes were connected to the smart meter outside the house and one of them blew, but it’s not clear if the meter is the cause of the fire.
For any specific fire, it can be difficult to determine if the “cause” of the fire is the smart meter even if the meter is located at or near the “origin” of the fire.  What is disconcerting, however, is how quickly the utility company will dismiss a smart meter as the cause of a fire even when fire department investigators will simply state that the cause is “undetermined.”  In this case, it appears that the smart meter for the burned home in Detroit was manufactured by Itron.
In the end, utilities will generally blame the customer’s wiring or a “hot socket” issue.  A hot socket is where there is a loss of tension in at least one of the meter socket jaws for the meter receptacle.  This loss of tension contributes to micro-arcing that can lead to eventual catastrophic failure of the smart meter with a subsequent explosion and/or fire.
Even if the hot socket is a source or “cause” of a fire, it is probable that the smart meter contributed to the eventual catastrophic failure.  This has been confirmed through industry testing results that utilities won’t disclose. …
Industry testing by a company called TESCO arrived at the following conclusion:

SkyVision Solutions believes that there are inherent issues with smart meter construction and operation that makes fires more probable or severe than with traditional analog meters.  These issues were discussed in a recent article, Smart Meters Increase the Risk of Fires!  Beyond that, however, even if the utility company is able to somehow “blame” a hot socket or customer wiring, the smart meter likely contributed to the fire, the severity of the fire damage, or the speed at which the fire spread. 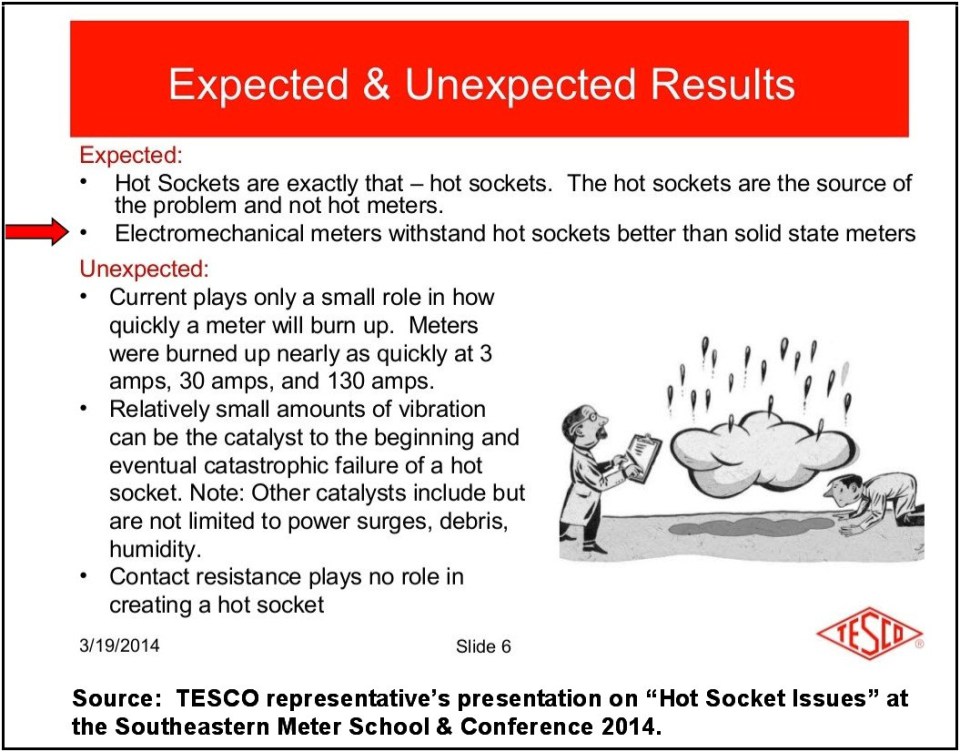 -------------------
Source Material for this Article:
Couple escapes fire, blames smart meter, WJBK-TV | Fox 2 News at: http://www.myfoxdetroit.com/story/26710141/couple-escapes-fire-blames-smart-meter
TESCO Presentation by Tom Lawton on “Hot Socket Issues – Causes and Best Practices” at the Southeastern Meter School & Conference 2014, available for viewing (as of October 6, 2014) at:  http://www.slideshare.net/bravenna/hot-socket-issues-causes-best-practices
Note:  Slide 5 of the above presentation states:  “Legal counsel for the utility customers would not allow publication of any data linking their utility to this sort of research.”  Also note that Slide 5 indicates that meter manufacturers and utilities “wanted an independent third party to … prove that the meters [themselves] were not the source [of fires].”  …  This is not exactly an objective testing goal.  So the presentation/testing results makes the “desired” conclusion that “hot sockets are the source of the problem not hot meters,” but yet solid state meters are more susceptible to catastrophic failure than traditional analog meters.  That logically means that smart meters are indeed a source of “problems”.
Share |
Previous Post
Next Post
comments powered by Disqus