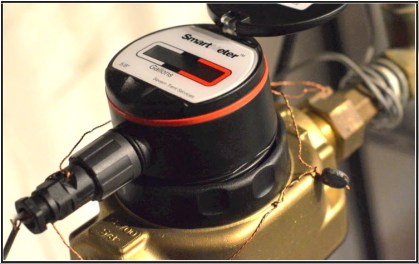 An extensive investigative report was published this week by the Chicago Tribune dealing with so-called ‘smart’ water meters.  The report deals primarily with accuracy and billing problems for the Chicago suburb of Tinley Park but also raises concerns as other utilities transition towards meters that measure and record quantities electronically.
One of Chicago’s largest suburbs, Tinley Park, uses a type of smart water meter that it knows  regularly overcharges residents — sometimes by hundreds of dollars while failing to give the public accurate information about the scope of the problem.
Tinley Park, Illinois, was one of the first towns to use so-called smart meters to record water usage in homes using electronic instead of mechanical parts.  The village has pitched the brand of meters it uses as more accurate than mechanical models, but a Tribune investigation has found that the meters regularly overstate how much water has gone through them, resulting in overcharges to residents.
As an indicator of the degree of deception and doublespeak by Tinley Park officials on this issue, the Public Works Director has stated:

“The meters don’t overcharge.  They misrecord what’s going through.”

“This was a disaster from the first day,” said Bob Soga, a retired Tinley Park Public Works employee. … “You’re dealing with what they call a smart meter.  It’s not as smart as everybody thought it was.”
Although the village of Tinley Park publicly minimizes the possible extent of the problem, it does mention on its website that observed water usage rates may increase “at an abnormal rate due to water intrusion into the meter’s electronics even though no water may be flowing through the meter.”
As an example of the overbilling, two longtime residents had years of unexplained usage spikes, with no intervention from the village, until they complained and the village finally found the smart meter to be inaccurate in 2011.  The village cut the residents’ water bills by $109.  Based upon the Tribune investigation, had the village acknowledged all suspicious meter readings, the customer would be owed $317 more as shown in the figure. 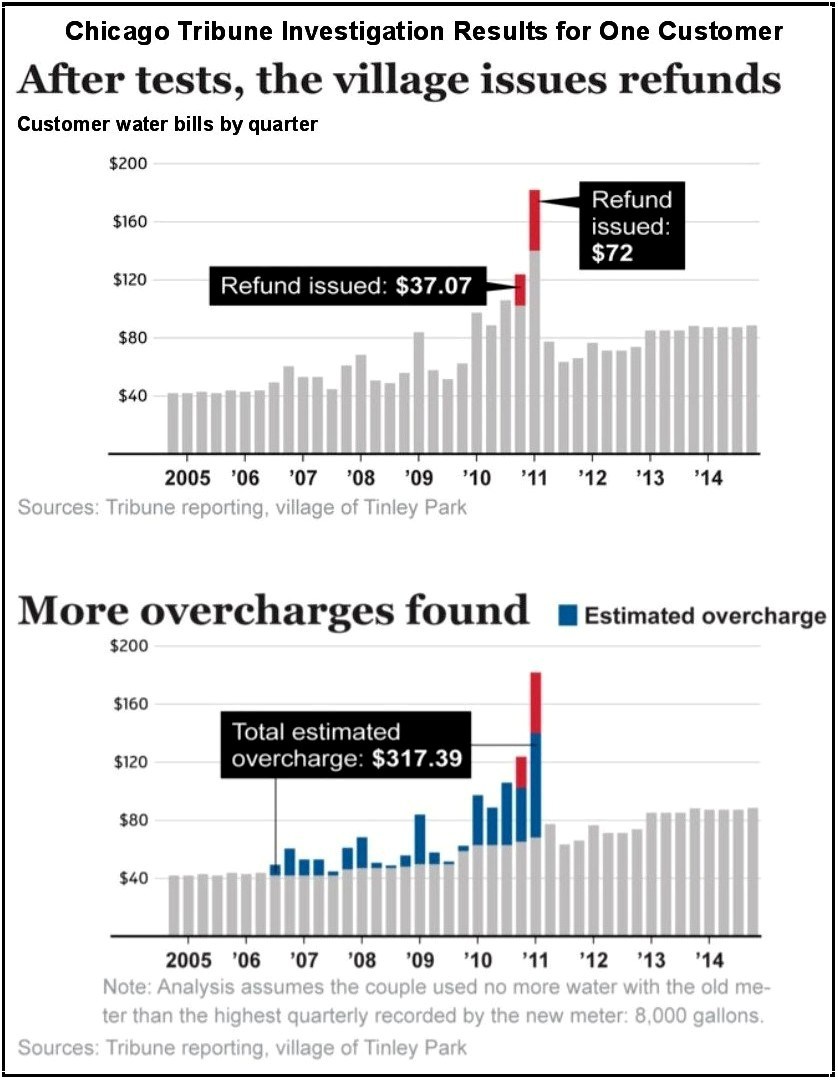 Tinley Park officials initially assured residents that existing smart meters were “within” the industry standards for accuracy.  Now, the village says the meters tested “close to the accuracy standards.”  When asked how close was close enough, the village has declined to say. 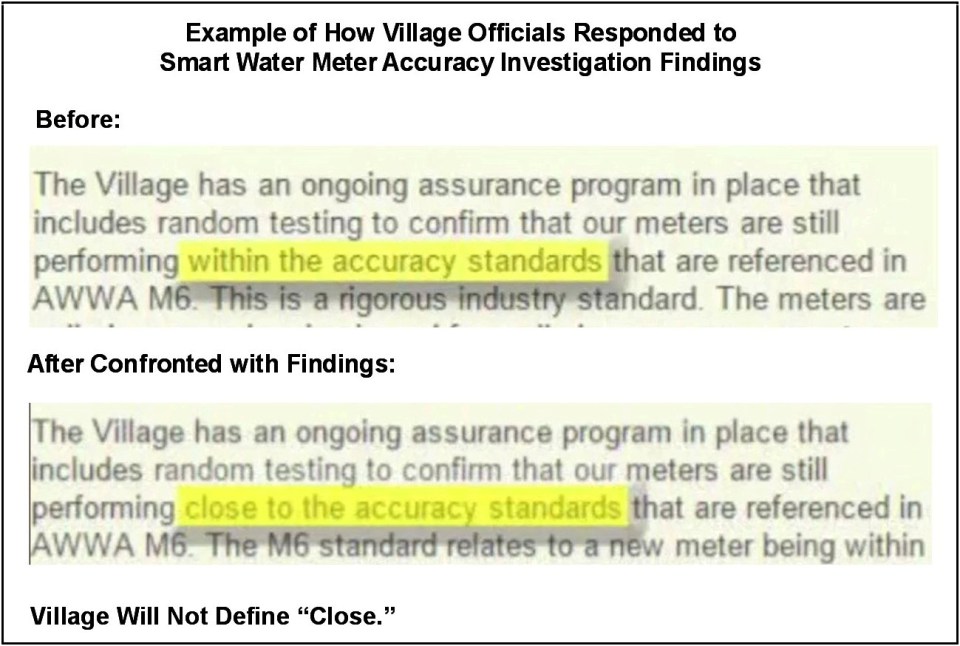 As stated by the Tribune:

“The issue is more acute with electronic meters because traditional meters use mechanical parts not known for overcharging.  If anything, experts say, traditional meters tend to undercharge residents over time [as mechanical parts wear out, they slow down], a reason utilities seek to switch to electronic meters pitched as accurate for life.”
“The danger to consumers can be particularly acute in Illinois, which does little to regulate publicly owned water utilities even as consumers face skyrocketing water rates.  Sugar Grove, [another Chicago suburb] also has fielded complaints of overcharges, records show.”
“What is happening in the [Tinley Park] suburb offers a cautionary tale of how consumers can lose money as utilities across the country move to meters that measure quantities electronically.”

There is a lesson here.  Unlike the utilities who are apparently fooled by the term “smart meter,” don’t trust that electronic meters are actually advanced or “smart.”  In fact, they are less reliable than the old meters.  Unfortunately, neither can you trust that your government or utility officials will admit the obvious that they were wrong in spending large sums of money on unproven and flawed technology.  In the case of Tinley Park, Illinois, the attempt to avoid accountability for overbilling and inaccurate statements on smart meters through deception and doublespeak is quite shocking and disgraceful.
Source Material for this Article
“Water meters not so ‘smart’ in Tinley,” at http://ireader.olivesoftware.com/Olive/iReader/chicagotribune/SharedArticle.ashx?document=CTC%5C2015%5C06%5C04&article=Ar00103
“Suburb’s smart water meters regularly overcharge residents,” at http://www.chicagotribune.com/news/watchdog/ct-water-meter-overcharge-met-20150603-story.html#page=1
“Tinley park vows to review overbilling water meters after Tribune probe,” at http://www.chicagotribune.com/news/watchdog/ct-water-meter-reaction-met-20150604-story.html
“Several chicago suburbs shift to electronic water meters, no testing required,” http://www.chicagotribune.com/news/watchdog/ct-water-meter-suburbs-met-20150603-story.html
Also see:  WBEZ 91.5 FM Chicago, “Tinley Park Water Meters Are Overcharging Residents,” at https://soundcloud.com/afternoonshiftwbez/tinley-park-water-meters-are?in=afternoonshiftwbez/sets/june-4-2015

The Village of Tinley Park is facing a major water problem but not the kind you hear about in California.  The southwestern suburb uses “smart meters” to measure water usage in homes.  They’re electronic instead of mechanical and are supposed to be more accurate.  But according to a Chicago Tribune investigation, the SmartMeters have been regularly overcharging residents, sometimes by hundreds of dollars.