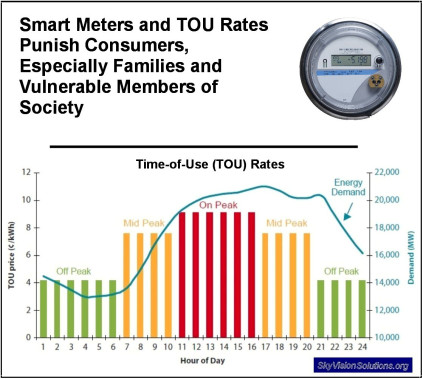 In describing the effects of time varying electricity rates or Time-of-Use (TOU) rates on consumers, I have previously referenced the logical and common sense assertions of the Berkshire-Litchfield Environmental Council (BLEC) [1]:

“Tiered pricing automatically penalizes the elderly, the self-employed, the infirm, the unemployed, stay-at-home parents with young children and anyone else who functions on a normal daylight schedule.  People can choose to do their laundry later at night but meals and bathing carry fewer options.”

More recently, the social implications of implementing TOU rates have now been described in a study published in September 2015 regarding “peak demand and the family peak period in Australia” [2].
The conclusion of the recent study as summarized in the paper’s abstract confirms the basic assertions of the BLEC:
“From our analysis we conclude that TOU tariffs are unlikely to effectively reduce peak period electricity consumption in households with children and may have inequitable financial and/or social impacts for these households.  Alternative approaches that better engage with the dynamics of social practice in family households are suggested.”
Continue reading article...
Electrahealth.com Editor Note: Swap out your 'smart' meter with a safe analog meter!
Share |
Previous Post
Next Post
comments powered by Disqus