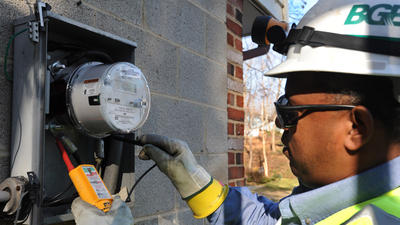 Reuben Lattimore opted out of getting a smart electricity meter installed at his Pikesville home last year, fearing the potential health affects of radiation from the device. Now, Baltimore Gas and Electric Co. wants to install another device at his home that raises the same concerns.
Those ignoring BGE requests to install smart meters will be charged fee
Though global and national public health organizations, smart meter manufacturers, researchers and utilities insist smart meters pose no health danger to the public, a small number of people remain worried about the devices as utilities across the country replace older meters with the new ones. While the Maryland Public Service Commission strongly supported smart meters, it voted to allow people to opt out, as long as they paid a fee.
But some, like Lattimore, feel blindsided when they discover the opt-out option is what is known as an ERT meter, which uses radio waves like a smart meter to transmit data, though less frequently than a smart meter.
Smart meters have "been reported to cause fires and it's not settled as to their safety," said Lattimore, 58. "This is a fairly new technology and it could take generations to find out whether it's safe or not, just like with cigarettes."
Lattimore said his electric meter is behind a fence and BGE typically sent him estimated bills. When he opted out of receiving a smart meter in April 2014, agreeing to pay a one-time fee of $75 plus $11 per month, he arranged a monthly appointment for a BGE technician to read his analog meter.
This month, Lattimore said, BGE sent him a letter saying they couldn't continue making appointments to read the meter and that he must get an ERT meter installed. If he did not, the letter said, his electricity would be turned off.
Lattimore filed a complaint with the PSC, putting the matter on hold until it is resolved there.
Upfront, monthly fees required to opt out of smart meters
Rhea Marshall, a BGE spokeswoman, said the company couldn't comment on an individual case but said the PSC allowed ERT meters as an acceptable replacement for analog meters that can't be easily reached.
ERT, short for Electronic Receiver Transmitter, is sort of a first-generation smart meter and can transmit data on energy usage without wires, Marshall said. The digital meters can respond to a signal from a truck passing by once a month, so a technician doesn't need to make an appointment to visit a resident's home. Smart meters, she said, transmit data on daily basis, allowing customers to track their usage more closely.
BGE is close to the end of the smart meter rollout, Marshall said, with about 90 percent of customers switched. About 1 percent have opted out, including those who were automatically opted out because they did not respond to multiple requests to install a meter, she said.
Lattimore said he hadn't been aware when he opted out of receiving a smart meter that he could be forced to accept an ERT meter.
"Our point, though, is after a year, why now?" he said. "And why weren't people told that this could happen when they made the choice to opt-out?"
Jonathan Libber, president of the Maryland Smart Meter Awareness group, which advocates against the devices, said he considers smart meters "the worst of all worlds" but said there were still concerns about ERT meters.
"There is a small percentage of the population that is sensitive to this kind of radiation, it's like an allergy," Libber said. "If you're one of the ones that has a bad reaction to it, it can be absolutely miserable. ... A lot of people are suffering and they don't know what they have."
Libber said he's heard concerns about ERT meters from others coming to his group, which numbers about 1,100. "If a person is sensitive then even the ERT meter could be a problem."
Marshall said traditional analog meters aren't manufactured any more, making it impossible to replace a malfunctioning or hard-to-reach analog meter with anything other than one that electronically transmits data. BGE has used ERT meters since 1996 and analog meters became hard to come by about a decade ago, she said.
Lattimore said the experience has been "extremely disappointing" and said he was "looking hard" at switching to solar for his energy needs.
Share |
Previous Post
Next Post
comments powered by Disqus