Last weekend, I was invited to speak at a Take Back Your Power screening in Dublin (California, not Ireland- where I spoke in June) at the International Brotherhood of Electrical Workers (IBEW) hall.  The IBEW recently joined more than 900 individuals and organizations who submitted comments to the Federal Communications Commission’s review of current RF guidelines.  In the IBEW’s comments, they stated that the FCC’s existing regulations “have no practical application to provide (radiofrequency) safety.” (IBEW letter pdf)  If anyone knows whether something is safe or not, it is probably the people who work around it all day.
Ironically, we are told that this hall in Dublin where Take Back Your Power was screened is where Jerry McNerney, the congressman who introduced the Smart Grid Advancement Act, launched his political career.  The bill would promote (some say mandate) ‘smart’ meters and require wireless chips in consumer appliances to qualify for the Energy Star efficiency program.  Several attendees at the event said they knew the man personally and afterwards some spoke about sending him a copy of the film.
About two dozen people showed up including scientists from Lawrence Berkeley National Labs (LBL), under contract to the Dept. of Energy (DOE), and one Oracle employee involved in meta-analysis of the mountains of smart meter data that are being generated- essentially the electronic signature of what goes on in your home, stored in a server farm.
When public doubts about the safety of the ‘smart’ grid began to reach a fevered pitch, LBL published a set of stilted, selective and inaccurate (but convincing-sounding) public responses to a smart meter inquiry at the Michigan Public Services Commission.  Why all the fuss to do damage control about an issue they claim isn’t even worthy of investigation?  The telecommunications industry, ‘smart’ grid program, defense industry- really the entire military-industrial complex that Eisenhower warned us about- is based on microwave transmissions.  If the public understood the truth and more importantly- acted on it, all of this could be at risk.  Thus, the robust response from the LBL and the resistance from those scientists steeped in its dogma.
After the screening, a woman named Joanne who has a pacemaker told her story about how the ‘smart’ meter affected her health when it was installed.  When she called PG&E (must have been in 2010 or 2011) there was a nice man on the phone who warned her that the new meter might cause interference with her medical device. PG&E came right away and changed it to an analog and didn't charge her a fee for 2 years. Now they have started charging even Joanne as the utilities go into lockdown zip-lip mode, not admitting to any possible health or safety effects even as thousands get sicker and fires consume homes and businesses like popcorn (you never know when the next one will go pop.) 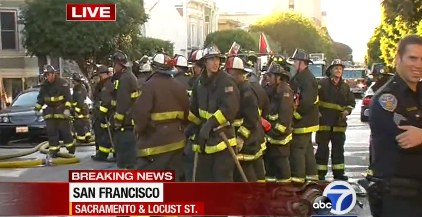