If 'smart' meters are such a great idea, why are utilities forcing them on customers?

Posted by Bob on 12/30/2013 to "Smart" Meters
Original Source
Electrahealth.com Editor's Note: We have seen video evidence of installed 'smart' meters broadcasting much more frequently with much more power than utilities claim. We have seen evidence of utilities using force to deploy smart meters. If 'smart' meters are such a great idea, if they really are a benign power company device, if they really are no threat to human health, why are utilities using force to deploy them? 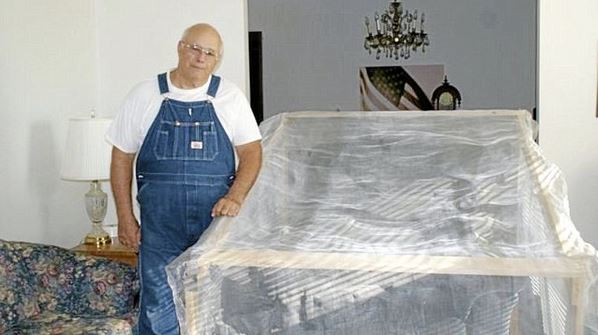 Joe Esposito with his protective Faraday cage
AEP-PSO, which plans to install more than 500,000 smart meters system wide over the next few years, denies that those devices emit radio frequency radiation at a high enough level to make people sick.
One of the Tulsa-based utility's customers, and apparently others who are battling the state's largest utility - OG&E - over similar issues, say otherwise.
"There's not one study to prove it's safe," Owasso resident Joe Esposito said in a call from his cellphone Friday. "It's killing people."
On the contrary, American Electric Power-Public Service Co. of Oklahoma says the studies prove that the RF signal from smart meters is safe. An Edison Electric Institute study in 2011 indicated that the RF level is multiple times less than that emitted by other devices, the utility says.
"The scientific evidence does not support that concern from those opposed to smart meters," said AEP-PSO spokesman Stan Whiteford. "The strength (of the radio frequency) is less than what you find in baby monitors and certainly cellphones. ... The concern is kind of misplaced."
AEP-PSO will spend $120 million to replace all 520,000 existing meters system wide with advanced devices by 2016. The utility already has rolled out pilot programs for smart meters in Owasso, Sand Springs, Okmulgee and the University of Tulsa.
The intent of smart-meter technology is to promote energy efficiency. Once installed, the devices can provide real-time data online to allow customers to better control energy usage.
Opponents fear that those smart meters, which use radio frequency to communicate the data, are making them sick. KFOR-TV in Oklahoma City aired a report last summer featuring OG&E customers who complained of nosebleeds and other ailments after the advanced devices were installed.
OG&E spokesman Brian Alford echoed Whiteford's comments on the safety of smart meters, noting they were usually only on for several minutes a day.
"We have great confidence in the technology," Alford said. "It meets all the standards of the FCC (Federal Communication Commission)."
The KFOR report also featured Esposito. On Friday he recounted the experience of feeling pain in his mouth and groin immediately after AEP-PSO installed smart meters in Owasso in 2011.
Esposito crafted a sheet of lead around the meter to block the radio emissions. He also has built a "Faraday cage," which is aluminum screening that blocks emissions, to protect himself and his family in their home.
"I didn't need a pharmaceutical for my leg or my teeth," he said. "I just need to stop the radiation."
Some counties in California and other entities have either banned smart-meter installation or are examining the issue. Other studies have found the devices less harmful, including a 2011 "White Paper" from the Edison Electric Institute.
Radio frequency radiation exposure drops "significantly" as distance from the transmitter increases, the EEI study found.
"Smart Meter exposures even at close range and with exaggerated duty cycle are many times less than other household devices and are compliant with FCC limitations," the study states.
In fact, it added by paraphrasing from an earlier California study that radio frequency exposure "of a person talking on a cell phone and a person 3 and 10 feet from a continuously operating smart meter would result in Smart Meter RF exposure of 125 to 1250 times less exposure than the cell phone."
Esposito isn't buying it. He said utilities have a vested interest in rolling out the wireless meters.
"If you really understand what's happening here, it's deception," he said. "There's a lot of money in this."
Indeed, AEP-PSO's $120 million price tag for the smart meters will likely be passed on to customers after the devices are fully rolled out in 2016.
Whiteford noted that AEP-PSO and other utilities are aware of the health concerns and believe the overwhelming evidence would debunk any fears if people would pay attention to the facts.
"These meters have one of the weakest RF signals," he said.
Smart meters already are installed at millions of sites nationwide and overseas.
Another criticism, independent of health concerns, is that the devices do not produce enough energy savings to make them worth the cost.
Share |
Previous Post
Next Post
comments powered by Disqus