Posted by Robert Daniel on 3/31/2015 to Wireless
Original Source
Update, March 24, 2015:  LOS ANGELES (KABC) – Construction on giant cell towers needed to make Los Angeles County’s emergency communication system work has been halted until radiation concerns can be addressed.  Dozens of firefighters came to the Los Angeles County Board of Supervisors meeting Tuesday to let them know they do not want cell towers where they work. 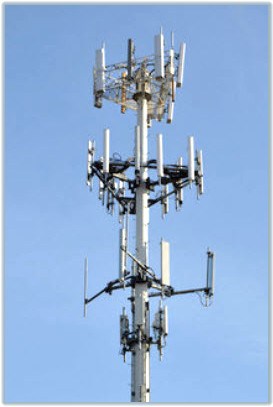 The Los Angeles Regional Interoperable Communications System (LA-RICS) is spending hundreds of millions of taxpayer dollars to install hundreds of new microwave radiation-producing cell towers throughout the County, including at County-owned and leased fire stations and lifeguard facilities.

“As firefighters and paramedics, we live in these firehouses.  What effect will these towers have on us?  What are the risks to our neighbors?  It’s a no-brainer that LA County should at least have done a proper study before putting 200-foot high-power microwave antennas on top of our heads.”
- Dave Gillotte, Active Duty Fire Captain
President, LA County Firefighters Local 1014

“This is fire captain Lew Currier. Los Angeles County is installing cell towers on 86 fire stations near you. The radiation generated by these seven story eye sores can cause debilitating health effects. Studies suggest nearby families could get sick too, yet the board of supervisors is erecting these toxic towers without public hearings or required studies. This time, be there for us, your firefighters. Call the Board of Supervisors at 213-974-1411. Tell them to stop the cell towers, NOW. This message is brought to you by Los Angeles County firefighters local 1014.”

“We’re not talking about driving down the freeway past a cell tower that looks like a fake tree.  We’re talking about having antennas practically on top of our heads day in and day out, irradiating us with radiofrequency (RF) radiation every second we’re in the stations.”

SkyVision Solutions supports the efforts of the firefighters in Los Angeles.  We would hate to see anyone having to live or work within about 200 to 300 meters of a cell tower [1].
For more information on this specific issue in LA County, refer to:  “Cell Tower Message to our Members,” at: http://local1014.org/index.cfm?zone=/unionactive/view_article.cfm&HomeID=482795
The following link may also be of interest:  “Position on the Health Effects from Radio Frequency/Microwave (RF/MW) Radiation in Fire Department Facilities from Base Stations for Antennas and Towers for the Conduction of Cell Phone Transmissions,” at:
http://www.iaff.org/hs/Facts/CellTowerFinal.asp
Update, March 24, 2015:  Here is a new article on the subject:  “A new hurdle for L.A. County emergency-radio effort: cell tower fears,” at
http://www.latimes.com/local/countygovernment/la-me-disaster-radios-20150324-story.html.  Quoting the article:

“If the data system isn’t completed by the end of September, local officials will have to return any unspent federal money.  To help keep to its schedule, the authority decided to build its cell towers on publicly owned sites, including county fire stations, and got them exempted from state environmental review requirements.
But the firefighter union contended that the towers’ radio frequency emissions would pose health hazards to them and neighboring residents.  And community activists got angry when they saw the towers — some with monopoles as high as 70 feet — going up without notice.  Some cities refused to allow the towers, reducing their planned numbers from 232 to 177.”

[1] Cited Study for Basis of Distance Factor
The chart shown below is derived from data found in the following article:  “Study of the Health of People Living in the Vicinity of Mobile Phone Base Stations:  [Part 1] Influence of Distance and Sex”; Santini R, Santini P, Danze JM.;  Pathol Biol (Paris) 2002; 50: S369–73. 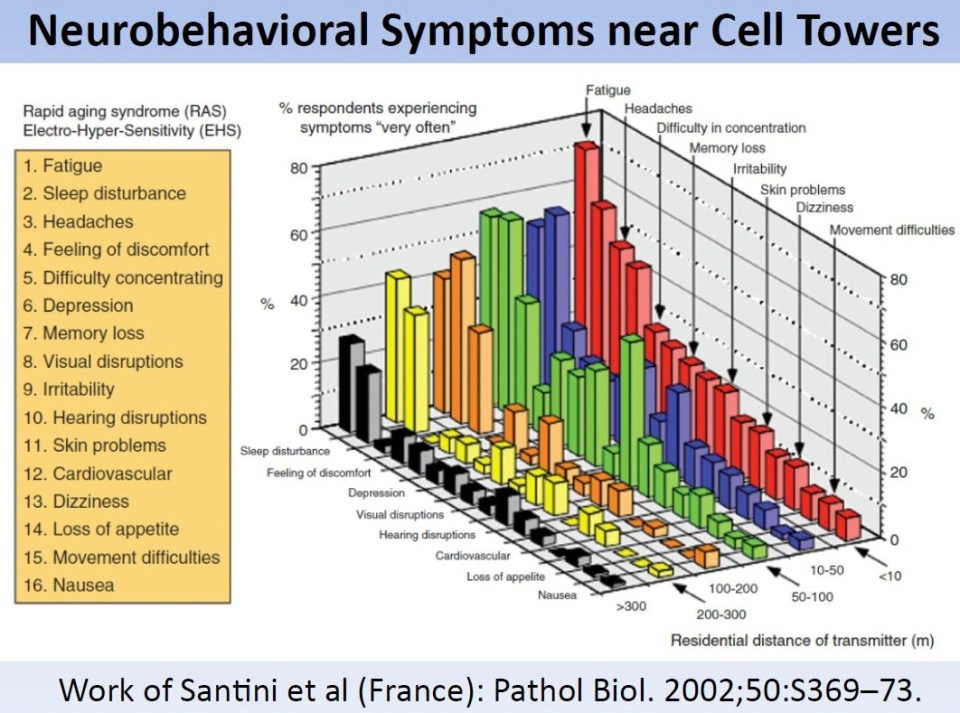 Santini 2002 Symptoms Near Cellular Base Stations
Discussion and conclusions of the published report include:

“This study gives evidence of the fact that bioeffects are reported by people exposed at up to 300 m from base stations.”
“The significant increase in the frequency of complaints in relation to the reference group (people exposed at > 300 m or not exposed) leads toward the observation found in the Australian governmental report indicating that at 200 m from a base station, some people exposed in their homes are complaining of chronic fatigue and sleep disruption.”
“From these results and in applying the precautionary principle, it is advisable that mobile phone base stations not be sited closer than 300 meters to populations and most significantly because exposed people can have different sensitivities related particularly to their sex.”