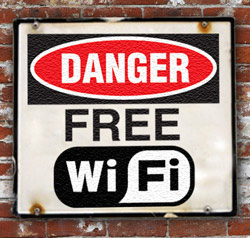 LOS ANGELES (CBSLA.com) — A local mother’s health concerns prompted her to cut her family off from wireless and wants more research conducted into the safety of WiFi.
In the Lawson household, cassette tapes are still in use, as are landline telephones.
Not in use, however, are cellphones, iPads, iPods nor absolutely no wireless connections to the outside world.
“You’re just thinking, ‘I want to live,’ ” said Anura Lawson, a mother and teacher.
Lawson says she started feeling sick in 2012 soon after the Los Angeles Department of Water and Power installed a wireless smart meter on her home.
There are 52,000 of these smart meters being tested in L.A., and the DWP says they’re safe.
But some people claim the radio waves they emit trigger health problems.
“I began to feel dizzy at first,” Lawson said. “Migraines. Heart palpitations.”
Lawson’s daughter, Amira, 22, also experienced trouble.
“My brain was running slower, and I was like, ‘I don’t know what’s going on,’ ” she said.
“There is a syndrome called electromagnetic hypersensitivity,” said Robert Nagourney, an oncologist in Long Beach and professor at UC Irvine.
“There are two kinds of radiation we speak about. One is ionizing, and one is nonionizing,” Nagourney said. “In ionizing radiation, clearly, there’s a great risk of DNA damage, mutation and cancer.”
This danger has not been proven with nonionizing radiation, which is the type emitted by cellphones, smart meters and WiFi.
But with our 21st century explosion of wireless, Nagourney says “we’re bathed in this type of radiation.”
“Does it cause medical illnesses? Great question. Difficult to answer,” the doctor said.
For the Lawson family, who consider themselves sensitive to electromagnetic fields, the smart meter had to go.
Once they got their analogue meter back, Lawson said they felt better healthwise.
But a 1 ½ years later, Lawson says her symptoms returned.
“I began to have migraines. I began to have the heart palpitations,” she said.
It coincided with a change at work as Lawson is an eighth-grade English teacher at Johnnie Cochran Middle School.
In March 2014 to facilitate its iPad program, Lawson says, the “LAUSD decided to install WiFi within my school site.”
With her health deteriorating, Lawson testified before the Board of Education.
“I’m the parent of six children. I want to be around to see them grow up,” she had said. “When I am in the WiFi classroom, I don’t feel good at all.”
“There were a lot of people that were concerned about putting WiFi in the classroom,” said Bill Piazzi, the LAUSD’s environmental assessment coordinator, whose job it is to make sure classrooms are safe.
Where there are WiFi access points, Piazza says, they use a very sophisticated piece of equipment, which measures radio-frequency output.
“We looked very hard at the potential exposures in the classroom,” he said. “No matter where we went, it’s all low.”
Piazza showed CBS2 an emissions report from a classroom that had WiFi.
“These are 30 kids streaming in a classroom, and these are the exposures that they’re getting,” he said “Look how low that is.”
Still, the board in September agreed to turn off the WiFi in Lawson’s classroom.
Now, she is believed to be the first public school teacher in the U.S. granted a health accommodation for electromagnetic hypersensitivity.
“I think the district did a very good job in making a reasonable accommodation for her,” Piazza said.
Lawson’s accommodation applies to her classroom only. To keep her children away from WiFi exposure, her four youngest are being educated at home.
The Lawson’s have Internet at home, but it’s only through a wired connection.
Over the past three years, Lawson says, she has encountered plenty of doubters, which Nagourney says is too bad.
“People are of different sensitivities. We know that one person can get a bee sting and nothing happens. Another person goes into anaphylactic shock. It’s the same bee sting. Different reaction,” he said.
Nagourney says the likelihood of WiFi emissions causing illness is small, “but the chance is not zero.”
Lawson says she would like to see the issue thoroughly researched and believes the newness of wireless makes it impossible to fully understand now how it might one day affect one’s health.
Thus, she’s keeping her kids away from it for as long as she can.
“Teaching doesn’t have to involve a device,” she said. “I think that our students unfortunately are the Guinea pigs, and I don’t think that’s right.”
The LAUSD says it is continuing to study all safety data with respect to WiFi. To view the most recent reports, click here.
Lawson has started an online petition to get WiFi out of California classrooms. For more information, click here. To reach Nagourney, click here.
Share |
Previous Post
Next Post
comments powered by Disqus