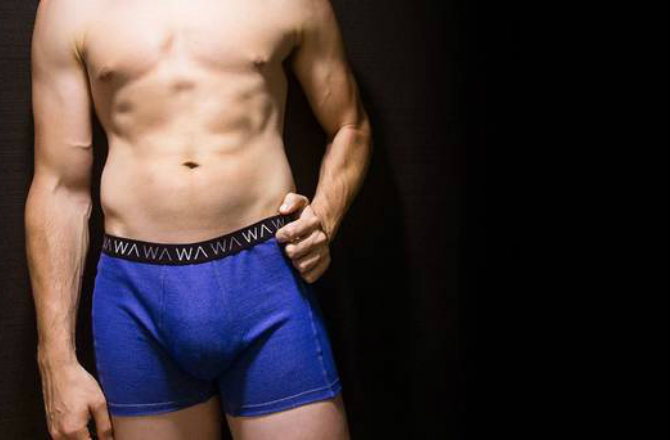 Well, here’s some news we can use. Half of us, anyway.
Following up on his Indiegogo campaign from a couple years back, British scientist and entrepreneur Joseph Perkins has finally delivered his Wireless Armour line of underwear, designed to protect men from the potentially harmful effects of electromagnetic wireless radiation.
Perkins’ invention is intended to address a anxiety increasingly familiar to the 21st century man: As we run around all day with cell phones in our pockets and laptops on our laps — should we worry about all that wireless radiation in close proximity to, you know, the equipment?
Maybe so. While research on the matter is far from conclusive, studies have shown that the electromagnetic radiation emitted by computers and mobile devices may have an effect on sperm count and mobility.
According to London’s Daily Mail, a recent U.K. study suggests sperm mobility drops by around 8 percent when men are regularly exposed to electromagnetic radiation from cell phones in close proximity. Your front pocket, say.
The Wireless Armour line of underwear — available for online purchase now — aims to protect the wearer by way of a mesh of silver threads woven into the fabric. The silver disperses incoming electromagnetic radiation, protecting all the relevant parts in the anatomical issue at hand.
Independent testing concludes that the Wireless Armour design blocks upwards of 99 percent of all incoming cellular and Wi-Fi radiation.
Alert readers will note that the Wireless Armour mesh is essentially a kind of flexible Faraday cage, a technique long used to protect sensitive equipment from electromagnetic and electrostatic fields.
Faraday cages are named after inventor Michael Faraday (1791-1867), whose enthusiasm for exotic undergarments was known throughout the Victorian-era scientific world. Just kidding.
Each pair of Wireless Armour underwear has about 20 percent silver woven in, which also serves to strengthen the fabric and add antimicrobial properties, according to the company.
The underwear is available in boxer and boxer-brief styles, with front-facing “180-degree” protection selling for about $38, and back-pocket “360-degree” protection selling at $55.
Only 133 shopping days until Christmas. Just FYI.
Electrahealth.com Editor Note: Use this meter to detect RF radiation that may be affecting your reproductive health!
Share |
Previous Post
Next Post
comments powered by Disqus