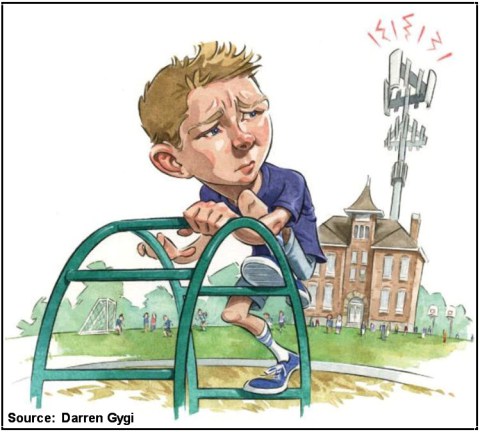 Introduction
On the evening of June 16th, 2014, the Board of Education for the Naperville, Illinois School District 203 met to discuss a “Proposed Cell Tower Lease at Lincoln and Kennedy Junior High Schools.”
Specifically, the Board of Education was requested “to review and consider information provided in order to advise Administration on its interest in formal consideration of the two requests.”
Based upon the results of the June 16 meeting, the Board of Education plans to continue to research the issue.  The Board realizes that community members and parents may be opposed to the cell towers being placed at the school, but some board members just seemed enticed with the additional modest income stream that the cell tower leases would provide.  If the Board decides to move forward after some additional fact-finding, community meetings/ hearings will be held.  It was disappointing that the Board just couldn’t say “No” at this time and move on to other issues.
[Note:  There were public comments at the meeting and a video excerpt is provided toward the end of this blog article.]
SkyVision Solutions has previously written on the subject of cellular towers being erected on or near school property:
"Cell Towers Placed Directly on School Grounds? Are You Serious?"
"Naperville School District 203 Considers Cell Towers"
To again help make the point on the inadvisability of cell towers being erected on school property, two principal avenues of thought will be presented, one technical and one not so technical.
Why Go to the Trouble of Causing Parents to Worry?
Regardless of the technical arguments, why make some parents worry about cell tower radiation unnecessarily?  The school is in the business of educating children.  Promoting the emissions of radiofrequency (RF) radiation from cellular towers on school property is not related to that endeavor and is not required to fund school operations.
To bring home this point, let’s review a recent proposal for a cell tower to be erected in Edwardsville, Illinois on school property.  Please watch the following 1 minute 30 second video describing the proposal.  This video represents an excerpt from a news report regarding a school meeting held on February 19, 2014.
Cell Tower Concerns at School News Report - see video on Original Source
On March 11, 2014, the Edwardsville, IL District 7 Board of Education unanimously agreed to end discussions with AT&T.  According to a news report, Board ends tower discussions with AT&T:

The Edwardsville District 7 Board of Education unanimously agreed to terminate discussions with AT&T about the possibility of constructing a cellular tower on Leclaire Elementary School property.  The decision came after the district coordinated a public meeting on February 19th between AT&T representatives and Leclaire area residents.
Edwardsville District 7 Superintendent Ed Hightower … noted that while AT&T’s research had shown that the safety of residents and students would not be compromised by the installation of the tower…, the overriding feelings from parents was that they were concerned for the safety of their children because the impact of cell towers is largely unknown at this time.

A Technical Perspective and the Precautionary Approach
Although there is evidence that exposure to cell tower emissions can cause such health-related effects as irritability, headaches, and similar complaints, for purposes of this blog article, we will primarily present a narrowly focused, logical, and compelling argument based solely upon RF radiation being declared a possible carcinogen.
In May 2011 at the meeting at the Headquarters of the International Agency for Research on Cancer (IARC) in Lyon, France, the Working Group of 30 scientists nearly unanimously declared radiofrequency (RF) radiation as a possible carcinogen.  This declaration has effectively been ignored by the promoters of wireless technologies.
Here is the argument of why the IARC declaration should not be ignored:
The decision to classify RF radiation as possibly carcinogenic was based predominantly on the results of the epidemiological studies showing that long term extensive use of cell phones increases the risk of developing brain cancer.
This means that the possible health effect of cancer developed in people using regular cell phones, compliant with current Federal Communications Commission (FCC) radiation emission safety guidelines.  Objectively, one can then conclude that current RF exposure guidelines are insufficient because the amount of radiation emitted by the cell phones causes an increased health risk of developing cancer.  Once one accepts that FCC or similar international guidelines are insufficient for protection for cell phone radiation, we have no assurance that such guidelines are acceptable for any other wireless devices including cell tower emissions.
Beyond the actual IARC declaration of RF radiation being possibly carcinogenic to humans, there is an important paragraph contained in the full IARC Monograph, Volume 102, for non-ionizing radiation (and radiofrequency electromagnetic fields), published April 2013:

“Although it has been argued that RF radiation cannot induce physiological effects at exposure intensities that do not cause an increase in tissue temperature, it is likely that not all mechanisms of interaction between weak RF-EMF (with the various signal modulations used in wireless communications) and biological structures have been discovered or fully characterized.  Biological systems are complex and factors such as metabolic activity, growth phase, cell density, and antioxidant level might alter the potential effects of RF radiation.  Alternative mechanisms will need to be considered and explored to explain consistently observed RF dependent changes in controlled studies of biological exposure.”

The above paragraph is an acknowledgment that RF induced changes are occurring in controlled studies which cannot be explained through a thermal mechanism, … the only mechanism accepted by the FCC.  Because of this IARC acknowledgment and the fact the current exposure guidelines are known to only protect against thermal RF-related effects, there is clear justification to implement a precautionary approach with regard to further exponential expansion of wireless technologies in our society until further research is completed.
Consistent with the precautionary approach, SkyVision Solutions recommends, at a minimum, the avoidance of chronic, involuntary, and unnecessary RF exposure.  This is the sort of exposure that would be received on school grounds from cell tower emissions.  Mere compliance with outdated FCC exposure guidelines cannot be the sole criteria by which RF exposure on school property is determined to be “safe” or prudent.
There is also the issue that for diseases such as brain cancer that it can take decades for the effects to reveal themselves.  Is it wise to sign long-term (25 year) lease agreements with carriers while we await the results of more definitive research of RF-related health effects?
Commentary on the American Cancer Society Document on Cell Phone Towers
The agenda for the Naperville School District Board meeting includes reference of an American Cancer Society (ACS) document purporting to show that, “Cell phone towers are not known to cause any health effects.”  SkyVision Solutions could perform a line by line refutation of this document but will concentrate on two paragraphs:

“At ground level near typical cellular base stations, the amount of RF energy is thousands of times less than the limits for safe exposure set by the US Federal Communication Commission (FCC) and other regulatory authorities.  It is very unlikely that a person could be exposed to RF levels in excess of these limits just by being near a cell phone tower.”
“IARC … noted that exposure to the brain from RF fields from cell phone base stations (mounted on roofs or towers) is less than 1/100th the exposure to the brain from mobile devices such as cell phones.”

The above statements assume that FCC exposure guidelines are acceptable which has just been placed into doubt by the information presented in the previous section.  Therefore, we have no assurance that chronic exposure to RF levels 1,000 times less than the FCC exposure guideline is “safe.”
It is inappropriate and deceiving to compare cell phone exposure to base station exposure as explained in the ACS document.  The average American uses a cell phone for voice communications for approximately 15 minutes per day which amounts to 1/100 of a 24-hour day.  If one were exposed to a cell phone base station at close range on a chronic and continual basis at 1/100 of the level of a cell phone, then the total RF exposure over time would approach being the same under this scenario.
In addition, the perspective advanced by the ACS document is based upon a binary simplistic logic that exposure levels are either acceptable or not acceptable; is non-conservative from a public health protection viewpoint; and does not acknowledge utilizing a precautionary approach when limited evidence exists for adverse health effects but where the actual magnitude of the risks cannot be determined with certainty.
Wi-Fi Exposure vs. Cell Tower Exposure and Other Exposure Sources
SkyVision Solutions also opposes the widespread and indiscriminate use of Wi-Fi in our schools, but let’s deal with one problem at a time.  For Wi-Fi exposure, the analysis can be more complex because at least it can be argued that students are gaining a benefit for the exposure received as part of the educational process.  The problem here is that most school officials are not aware of the issues and concerns to make informed decisions.
As part of a review of Wi-Fi safety in schools in the state of Washington, SkyVision Solutions recently submitted formal comments which are available at the following link:  SkyVision Solutions Comments on WA State WiFi Draft Report.  School officials are invited to review these comments.  In general, SkyVision Solutions shares the position taken by the American Academy of Environmental Medicine (AAEM):

“To install Wi-Fi in schools plus public spaces risks a widespread public health hazard that the medical system is not yet prepared to address. …  It is better to exercise caution and substitute with a safe alternate such as a wired connection.  While more research is being conducted, children must be protected.  Wired technology is not only safer; it [is] more secure.”

Finally, to emphasize the concept that the younger you are the more sensitive you are to RF radiation exposure, it may be appropriate for school officials to become familiar with the just announced BabySafe Project, a national awareness campaign that urges pregnant women (who could be teachers) to take simple steps to reduce a baby’s exposure to wireless radiation.  Details can be obtained at the following link:  Launch of the “BabySafe Project.”
Public Comments
Three residents did provide public comments at the Naperville School District 203 Board meeting.  Although the entire video is part of the public record, SkyVision Solutions generally edits out the personal names of the members of the public for their privacy when placing videos on this website.
Public Comments on Proposed Cell Towers at Schools - see video on Original Source
One resident questioned (toward the end of the above video clip) whether there were studies about people who lived within 75 yards of a tower, 365 days per year.  This brings to mind the work done by Santini (2002) as portrayed below:

Santini 2002 Symptoms Near Cellular Base Stations
The above chart is derived from data found in the following article:  “Study of the Health of People Living in the Vicinity of Mobile Phone Base Stations:  [Part 1] Influence of Distance and Sex”; Santini R, Santini P, Danze JM.;  Pathol Biol (Paris) 2002; 50: S369–73.
Discussion and conclusions of the published report include:

“This study gives evidence of the fact that bioeffects are reported by people exposed at up to 300 m from base stations.”
“The significant increase in the frequency of complaints in relation to the reference group (people exposed at > 300 m or not exposed) leads toward the observation found in the Australian governmental report indicating that at 200 m from a base station, some people exposed in their homes are complaining of chronic fatigue and sleep disruption.”
“From these results and in applying the precautionary principle, it is advisable that mobile phone base stations not be sited closer than 300 meters to populations and most significantly because exposed people can have different sensitivities related particularly to their sex.”