NAPERVILLE, IL — Over the past year, the City of Naperville and its municipally owned utility have installed smart meters for nearly all residents.  In an attempt to resolve some concerns related to the City no longer documenting “current” and “previous” electrical usage meter readings on monthly bills, one resident sent the City of Naperville a Freedom of Information Act (FOIA) request in an attempt to obtain this information for her account.  What she received back was a month’s worth of 15-minute interval usage amounts in kWh, literally thousands of numbers with no associated meter readings.  The resident sent the information to me to determine what sense I could make of the numbers and to show me that the actual meter readings were not included with the 67-page document that she had received from the City. 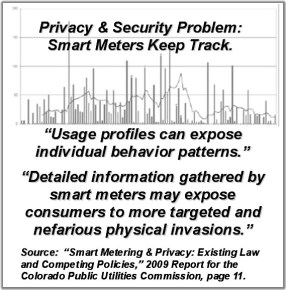 Part of my response back to the resident was, “OK, Yes I agree there is a problem with the type of data you are provided through the attached data sheet since it is only 15 minute increments,” with no actual cumulative meter readings.
The granular energy usage data for the first page of the document I had been sent was for April 26, 2013.  I scanned it for a few seconds and noted clear patterns in the numbers (and without initially graphing the information) wrote the following message to the Naperville resident:
“Incidentally, for example, it appears on April 26, you got up pretty early?  You have increased energy usage starting at about 4:30 am.  Do you [normally] get up that early?  Particularly high usage from 5:45 am to 6:00 am. … Then it looks like no one was home from about 8:30 am until 3:00 pm.  You likely went to bed about 10:15.  Does that sound about right?”
The resident wrote back and was quite shocked at what I was able to deduce from just a quick scan of the information I had been sent.  In addition, she confirmed my clock times on household activities, even verifying with some debit card receipts that she was not home for the timeframe I indicated from about 8:30 in the morning until 3:00 in the afternoon. 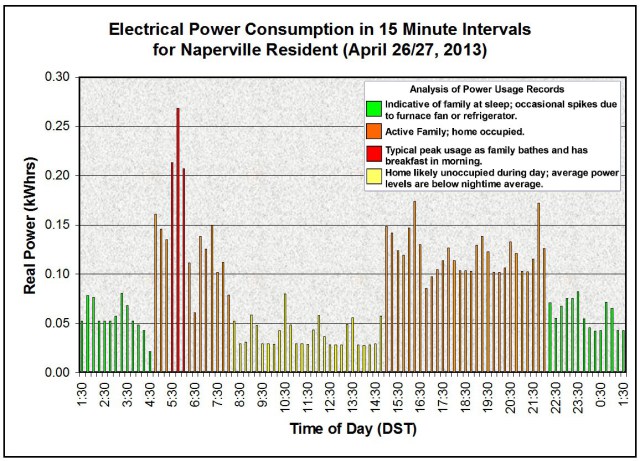 Naperville Resident Power Usage Apr 26 2013
I later graphed the 15 minute interval usage numbers for April 26, 2013, as shown in the figure above.  Without any special software or analysis, it is quite easy to infer human behavior from the graph.  It is clear that people in the family arose at 4:30 am and started their day with the typical activities of bathing and meal or coffee preparation.  From this graph I can’t say exactly what appliance is being used when, but the graph clearly reveals discrete human activity.  It is also clear that there is little or no human activity from about 8:30 am (maybe 8:15) until 3:00 pm.  You can also see how the usage readings abruptly drop off at 10:15 pm indicating that the family is retiring for the evening.
Let’s pick a different day of April 28, 2013, for the same Naperville resident.  See the difference?   The home is unoccupied.  There are no characteristic peak energy usage readings.  What you see is a levelized load with intermittent peaks associated with a refrigerator and probably some other appliance.   It doesn’t take a rocket scientist to discern that the home is now unoccupied and is more vulnerable to having an undetected robbery take place. 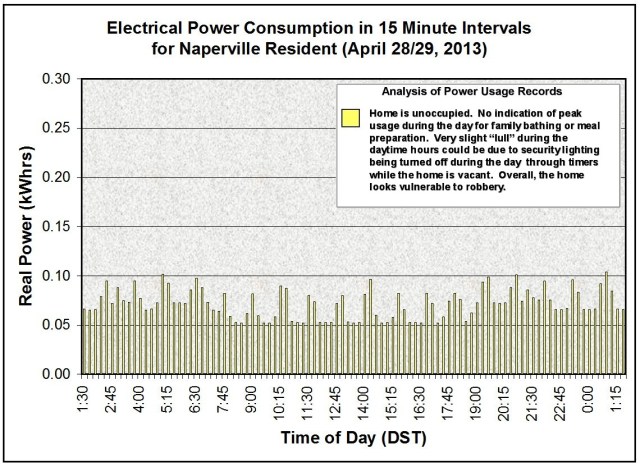 Naperville Resident Power Usage Apr 28 2013
For me personally, the type of information (as shown above) is exactly what I do not want other people to have.  I don’t want other people to be able to discern when I get up in the morning or when I go to bed.  When I go on vacation, I don’t want the ability for other people, no matter who they are, to be able to tell when (or confirm when) the house is either occupied or unoccupied.   I consider this a clear invasion of privacy and a threat to both personal security and the security for the home and property.
Since I am on a fixed rate pricing program for electrical energy usage, there is no business relationship basis for the utility to collect thousands of data points per month.  The utility only needs one data point per month to be able to calculate my monthly utility bill.
In response to a question about whether the utility can “know when I’m home,” the City states (as shown in the figure below) that “The utility cannot detect the presence of people in their homes.”   This response is a falsehood.  It is propaganda.  It is a lie.  If people are alive and using electricity, their presence is detected and behavior can be inferred.
The City also states that “generally” you can not “tell what I’m doing in my house.”  So in the answer to the second question, the City hedges a bit.  The word generally means “not in a specific or detailed way.”  My main point here is that if I can determine, using simple analysis, within a few minutes of the exact time of when someone gets up in the morning, when they leave the house, when they get back home, and when they retire to bed, … then that is much more specific and detailed than is acceptable to me.  How about for you?
NSGI Q and A on Privacy
The City states that detailed energy usage information is collected so that “Customers are empowered to securely track their energy use online.”
Madigan PhotoWell, in the words of the Illinois Attorney General, “The utilities want to experiment with expensive and unproven smart grid technology, yet all the risk for this experiment will lie with consumers. …  The pitch is that smart meters will allow consumers to monitor their electrical usage, helping them to reduce consumption and save money. …  Consumers [and taxpayers] don’t need to be forced to pay billions for so-called smart technology to know how to reduce their utility bills.  We know to turn down the heat or air conditioning and shut off the lights.”
[Reference:  http://lisamadigan.org/Newsroom/lisainthenews/item/2011-06-lisa-madigan-opinion-editorial-comed-experiment-too.]
Let me be clear.  Smart meter data can be used by others either maliciously or inadvertently using existing or developing technology in an unauthorized fashion to infer types of activities or occupancy of a home for specific periods of time.  It is also possible that such information can be sought for legal proceedings as evidence to prove or disprove certain propositions.  For example, were you home on the night in question for the alleged crime?  For utilities or others to deny these legitimate concerns is evidence of obfuscation, essentially hiding the truth from the consumer.
Supplemental Information on How Specific Appliance Usage Can Be Determined
In addition to the standard ”real power” readings measured in kWhrs, the City of Naperville smart meters also collect information related to a parameter called reactive power (not provided to the Naperville resident through the FOIA request mentioned above).  The real power readings in combination with reactive power readings create the potential to reveal additional information from smart meter data, including specific appliance usage.
“Non-intrusive appliance load monitoring (NALM) is a convenient approach to determine the energy consumption of individual appliances.  The NALM employs only a single point of measurement, e.g., at the main electrical service entry point of the home, which does not require installing meters on each individual appliance. …  Each appliance has electrical features that can be used as a unique ‘signature’ to recognize its contribution in the overall consumption.  The most well developed NALM technique utilizes the signature given by the real and reactive power of the appliance during its steadystate operation.”  [emphasis added]  [Reference Citation:  “Compressive Sampling for Non-Intrusive Appliance Load Monitoring (NALM) Using Current Waveforms,” Wang, Y. et. al., dated June 2012, ACTA Press.]
Essentially, Naperville smart meter data in combination with a backend computer analysis can reveal individual appliance signatures.  Refer to the figure below for a somewhat simplistic and conceptual illustration of how appliances have “signatures.” 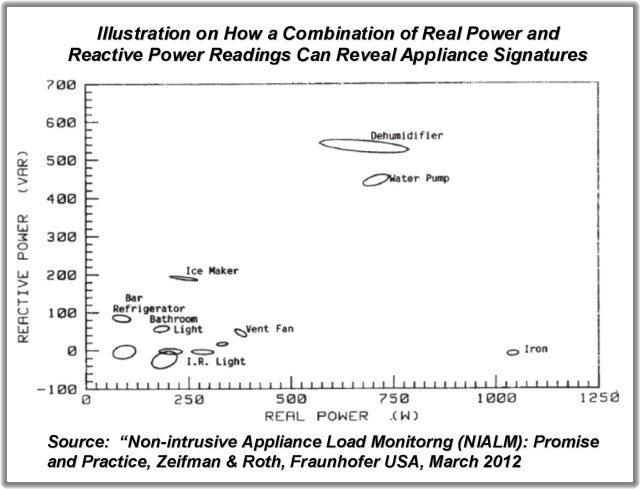