Risk for Glioma Triples With Long-Term Cell Phone Use 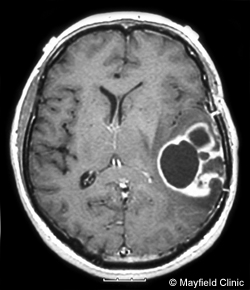 CLINICAL CONTEXT
During the last decade, there has been a dramatic global increase in wireless communication use, resulting in greater exposure to radiofrequency electromagnetic fields (RF-EMF). Health risk concerns center on the brain, which is the main target of RF-EMF during use of mobile or cordless phones.
Some evidence suggests the possibility of increased brain tumor risk associated with use of wireless phones, but findings to date have been mixed and inconclusive. The International Agency on Research on Cancer (IARC) at the World Health Organization concluded that RF-EMF exposure is "possibly" a human carcinogen.
STUDY SYNOPSIS AND PERSPECTIVE
Long-term use of both mobile and cordless phones is associated with an increased risk for glioma, the most common type of brain tumor, the latest research on the topic concludes.
The new study shows that the risk for glioma was tripled among those using a wireless phone for more than 25 years and that the risk was also greater for those who had started using mobile or cordless phones before age 20 years.
"Doctors should be very concerned by this and discuss precautions with their patients," study author Lennart Hardell, MD, PhD, professor, Department of Oncology, University Hospital, Örebro, Sweden, told Medscape Medical News.
Such precautions, he said, include using hands-free phones with the "loud speaker" feature and text messaging instead of phoning.
The study was published online October 28 in Pathophysiology.
Pooled Data
The recent worldwide increase in use of wireless communications has resulted in greater exposure to RF-EMF. The brain is the main target of RF-EMF when these phones are used, with the highest exposure being on the same side of the brain where the phone is placed.
The new study pooled data from 2 case-control studies on histopathologically confirmed malignant brain tumors. The first included patients 20 to 80 years old diagnosed from 1997 to 2003, and the second included those 18 to 75 years old diagnosed between 2007 and 2009. Patients came from 6 oncology centers in Sweden.
Patients were matched with control participants of the same gender and approximate age who were randomly drawn from the Swedish Population Registry.
All participants filled out a questionnaire detailing exposure to mobile phones and cordless desktop phones.
The analysis included 1498 cases of patients with malignant brain tumors; the mean age was 52 years. Most patients (92%) had a diagnosis of glioma, and just more than half of the gliomas (50.3%) were the most malignant variety --- astrocytoma grade 4 (glioblastoma multiforme). Also included were 3530 control participants, with a mean age of 54 years.
The analysis showed an increased risk for glioma associated with use for more than 1 year of both mobile and cordless phones after adjustment for age at diagnosis, gender, socioeconomic index, and year of diagnosis. The highest risk was for those with the longest latency for mobile phone use at 25 years.
Table. Glioma Risk With Mobile and Cordless Phone Use

The risk was increased the more that wireless phones were used. The odds ratios (ORs) steadily increased with increasing hours of use.
The risk for glioma was greatest in the most exposed part of the brain. The ORs were higher for ipsilateral exposure and for glioma in the temporal and overlapping lobes.
Furthermore, the risk was highest among participants who first used a mobile phone (OR, 1.8) or cordless phone (OR, 2.3) before age 20 years, although the number of patients and control participants was relatively small.
Developing Brain
As Dr Hardell explained, children and adolescents are more exposed to RF-EMF than adults because of their thinner skull bone and smaller head and the higher conductivity in their brain tissue. The brain is still developing up to approximately age 20 years, and until that time, it is relatively vulnerable, he said.
There was a higher risk for third-generation (3G) mobile phone use compared with other types, but this was based on short latency and rather low numbers of exposed participants, said the authors. 3G universal global telecommunications system mobile phones emit wide-band microwave signals, which "hypothetically" may result in higher biological effects compared with other signals, they write.
Such biological effects, said Dr Hardell, could include an increase in reactive oxygen species, which several articles have linked to cancer. The p53 gene has also been implicated, he said.
The study's very high participation rate (86% for patients and 87% for control participants) makes it unlikely that selection bias influenced the results, said the authors.
Dr Hardell believes the new findings reinforce the message that EF-EMF emissions from wireless phones should be regarded as carcinogenic under IARC classifications and that current guidelines for exposure "should be urgently revised" to reflect that.
According to the IARC's 2013 report, there is a "causal" relationship between use of both mobile and cordless phones and that the risk for glioma is "possible."
Numerous studies have looked at the link between use of wireless phones and brain tumors. Studies by Dr Hardell and his colleagues dating back to the late 1990s have found a connection with mobile and cordless phones.
However, the INTERPHONE study (Int J Epidemiol 2011;39:675-694; Cancer Epidemiol 2011;32:453-464) failed to find strong evidence that mobile phones increase the risk for brain tumors.
In addition, a large prospective study (Int J Epidemiol 2013;42:792-802) found that mobile phone use was not associated with increased incidences of glioma, meningioma, or noncentral nervous system cancers in middle-aged British women.
According to Dr Hardell, this last study was limited because it used information at one point in time. "It is not a case-control study and has serious problems with the methods used," he told Medscape Medical News.
Evidence "Unconvincing"
Reached for a comment, L. Dade Lunsford, MD, Lars Leksell Professor of Neurosurgery, and director, Center for Image Guided Neurosurgery, University of Pittsburgh, Pennsylvania, said that the new study provides additional "but as yet unconvincing" evidence of a potential role of cell or cordless phone technologies in the pathogenesis of gliomas.
He noted that some features were not controlled for, including ionizing radiation exposure and family history.
As well, he said, the study has recall bias, with results possibly being affected by patients being anxious to solve the question of "why me?"
"It is of interest that the only study that used actual industry data of cell phone use (the Danish study [Lancet Oncol 2011;12:624-626; Rev Environment Health 2012;27:51-58]) was dismissed by the authors as 'uninformative'," he said. "Perhaps it was not supportive of the author's premise."
Although the study did not specify the side of the tumor, Dr Lunsford pointed out that roughly 90% of the world's population is right-handed and that most hold their mobile phone to their left ear in order to write with their dominant hand. "One could theorize then that left-sided tumors would predominate with the temporal lobe being most adjacent to the cell phone output."
Dr Lunsford also commented that both glial and Schwann cells are late-responding tissues and that the oncogenesis of such cells by mobile phone technologies remains unexplained. "If cell phones cause such tumors, why do patients not develop higher rates of ipsilateral basal or squamous cell cancers, or melanomas -- these are frequently dividing cell lines that theoretically ought to be even more susceptible."
Although the potential role of cell phones as an additional factor in oncogenesis "can't be dismissed out of hand," the use of this technology does save lives, stressed Dr Lunsford.
"Cell phone has provided an amazing safety net for citizens of almost all cultures across the world. The lives saved by the proliferation of cell phone communication [are] phenomenal -- emergency calls, quick first responders, warnings of severe weather are only a few examples."
Pathophysiology. Published online October 28, 2014. Abstract
STUDY HIGHLIGHTS
CLINICAL IMPLICATIONS
Share |
Previous Post
Next Post
comments powered by Disqus