Posted by Bob on 4/22/2014 to "Smart" Meters
Original Source
Electrahealth.com Editor Note: This condescending article by a pro-smart grid blogger is provided to demonstrate that our peaceful activism and education is catching on and causing headaches for the electric power delivery industry! 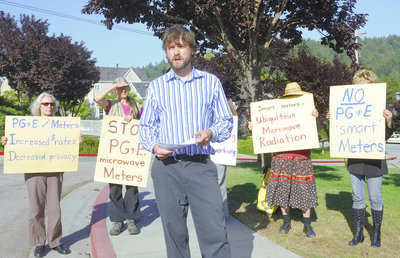 Quick Take:  Smart meters may soon replace alien invasions and Obama's birth certificate as the nation's most popular conspiracy theory. Are you ready if it hits your service territory? – Jesse Berst
"Is your home's energy meter spying on you?" screams a headline from FoxNews.com. It calls smart meters a "Pandora's box of privacy concerns," citing concerns from the American Civil Liberties Union.
To be fair, even the U.S. Department of Energy admits that smart meters could "reveal personal details about the lives of consumers, such as their daily schedules (including times when they are at or away from home or asleep), whether their homes are equipped with alarm systems, whether they own expensive electronic equipment such as plasma TVs, and whether they use certain types of medical equipment."
And according to Fox News, California's Pacific Gas & Electric Company was required to pay $390,000 to the state's general fund last year for spying on anti-smart meter activists.
Even so, "privacy zealots obsess over something that wouldn't concern a rational person," said Roger Pilon of the Cato Institute to Fox News. "It's the kind of mass hysteria we'd seen in other eras for other issues."
And the hysteria is spreading
Whether it is rational or not, the smart meter backlash continues to spread. Consider these recent examples:
Share |
Previous Post
Next Post
comments powered by Disqus