Posted by Bob on 2/18/2014 to "Smart" Meters
Original Source
A fast-moving apartment building fire occurred on Thursday, February 6, 2014, in Bensalem, Pennsylvania when at least one smart meter exploded and caught fire.  Thirty (30) residents were displaced by the ensuing blaze at Bensalem’s Thunder Hollow apartments. Sixteen (16) apartments were affected.  One firefighter was injured.  According to the Bucks County Courier Times, the Bensalem Battalion Chief Robert Sponheimer said the fire started in a utility meter in an outside shed that housed electrical meters.  He also said “residents reported hearing a loud bang, then losing power Thursday evening.  Within minutes they saw smoke pouring out of the shed.  The fire then spread to the building and its roof.”
Dramatic camera footage exists taken soon after the fire started, during the fire fighting activities, and during the recovery efforts, making you feel as if you are “on-the-scene” as it happens.  In the first video where you see the dramatic flames about 25 to 30 seconds into the video, they are emanating from an outdoor shed containing smart meters.
Reporting from most news sources has indicated that the cause of the fire remains under investigation.  However, on-scene reports indicate that the fire was electrical in nature and was started by a fire in “a utility electric meter.”  These apartments are known to be equipped with smart meters.  …  We find it curious that the term “smart meter” was not used in original reporting of the fire since that would be a natural question to have asked and have reported to the public.
Updated Information:
One resident lives just a few feet from two sheds where individual smart meters are housed.  “I heard this boom and it sounded like a shotgun going off,” said the resident. 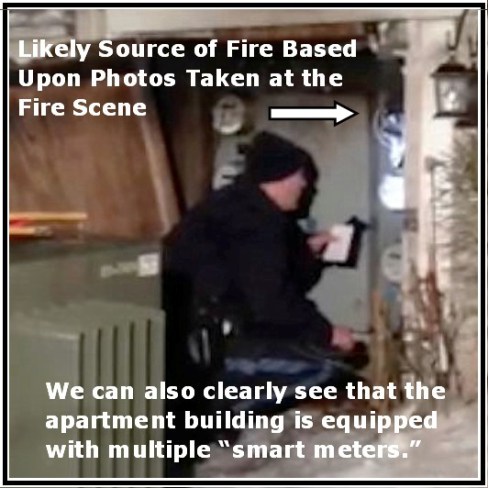 In the figure above, an officer as part of an investigation is shining a flashlight toward the two upper smart meters located on the right side of the outdoor shed.  The upper most smart meter looks completely deformed (despite the somewhat poor resolution of this photo). There appears to be melted plastic drooping down from what would be the normal meter location.  There is also blackened area at the top, where smoke, sparks, and fire previously billowed outward and upward.  Clicking on the photo will provide a somewhat better view. From a curiosity perspective, it would nice to have a close-up photo view of the affected smart meter to better examine how bad it really looks, but there is little doubt on what actually happened at this point.
Based upon a report in the Bucks County Courier Times, Battalion Chief Robert Sponheimer plans to meet with PECO Energy and township code officials to continue an investigation into a “meter malfunction.”  The fire has also reportedly been ruled an “accident.”  This determination is actually important in that it means the fire has been determined not to be the work of arson or meter tampering.
We have sufficiently reviewed the details surrounding the fire to now confidently conclude and report that the cause of the fire was indeed a “smart meter,” and the title of this blog posting has been revised accordingly.  It would appear that officials just don’t want to advertise this important detail concerning the fire.
Bottom line … smart meters do cause fires.
Bensalem Battalion Chief Robert Sponheimer is no stranger to the topic of smart meter fires. He seems to have been trying to do the right thing.  He said back in September 2012 that, “we were lucky so far,” based upon the limited damage resulting from the smart meter-related fires.
One source of information for this blog posting: http://www.buckscountycouriertimes.com/news/local/electric-meter-blamed-for-bensalem-apartment-fire/article_93cf65bb-a298-5978-a88e-464c2f4451e1.html
Commentary:
Follow-up reporting by one news outlet (the Bucks County Courier Times) that an electric meter was responsible for an apartment building fire brought to light the fact that a smart meter caused the events described in this blog posting.  One wonders how many other fires have been caused by smart meters but were never reported as such.  Such is the sentiment expressed in a letter sent to the Bowie Blade-News from February 13, 2014, at the following link:  http://www.capitalgazette.com/bowie_bladenews/letters/not-so-smart-meters/article_35caf4e1-8a54-5acf-95b3-0b6f865aff9d.html?mode=story.
Many laypersons don’t know what smart meters are, and during the first video above, it could be heard in the background that a woman was calling for help because a “transformer blew,” not knowing that what was housed in the outdoor shed were smart meters, not transformers.
Share |
Previous Post
Next Post
comments powered by Disqus