'Smart' Meters Spiral Out of Control and “Livin’ on a Prayer” 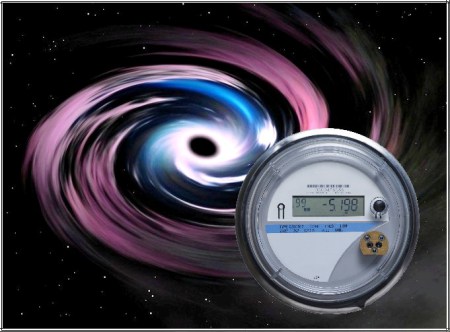 This past week has been one of the worst ever for “smart meters” in terms of critical news reporting and negative revelations about these devices.  Clearly, things are quickly spiraling out of control worldwide in terms of anybody believing that the smart meters are anything more than a giant and costly albatross hanging around the necks of consumers.
Problems in the United Kingdom (UK)
The UK House of Commons Energy and Climate Change Committee released a report which shows that the smart meter program in Great Britain in basically in shambles, with an admission that the program may prove to be a “costly failure.” Here are a few selected quotations from the report:

“[P]olicy problems are symptomatic of a national programme that the Government has left largely to suppliers and failed to drive forward effectively.  Consequently, we do not believe that near-universal smart meter roll-out will be achieved by 2020.
Without significant and immediate changes to the present policy, the programme runs the risk of falling far short of expectations.
At worst it could prove to be a costly failure.
For the Government to succeed with this nationwide project, it must now grip the reins and take a more active role to support the industry-led roll-out. … Getting it wrong risks embarrassment for the Government through public disengagement with a flagship energy policy and a costly missed opportunity.”

Smart Meter Fees Spiral in Australia
On March 13th, the Herald Sun in Australia reported that:

“Electricity smart meter fees have sucked up to $1000 from household budgets.”

This revelation has consumers questioning the wisdom of the government mandated smart meter program in Victoria which is now expected to cost over $2.4 billion.
News from Canada
Last week we reported on the Canadian Taxpayers Federation (CTF) announcing its government waste award given to the Ontario Ministry of Energy for its “Expensive, Broken, and Flammable Smart Meters.”
This week a detailed blog article investigated what might be causing so many consumers in Ontario to report “bills being two times, 3 times or even 8 to 10 times higher than they used to be” before smart meters were installed.  The article focused on how smart meters may be “susceptible to crosstalk, interference, human error in programming and potential outright tampering.”
Quoting an industry article and showing a graphic from Maxim Integrated on the subject of tampering, it is stated that security is going to be an issue for all utilities that adopt smart metering and that it must be given its “due consideration.”  In fact, as will be demonstrated later, security is not being given proper consideration. 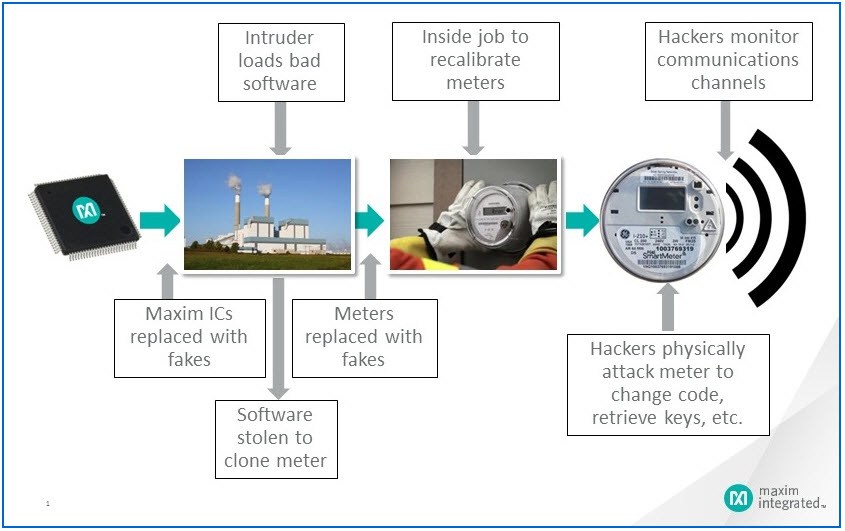 News in the United States
Within the last week an article out of Florida questioned, “Smart Energy Meters: Where’s the savings?”  Quoting the article:

“Five years ago came the promise:  A great new way of saving money on your energy bills was on its way.  An impressive new device called a ‘smart meter’ — a key component of the much touted ‘smart grid’ — would let consumers actually see how much power they’re using in their homes, thus empowering them to change their habits and slash their bills.”
“President Obama heralded the innovation:  ‘Smart meters will allow you to actually monitor how much energy your family is using by the month, by the week, by the day, or even by the hour,’ he said in 2009, as the federal government unleashed a $3.4 billion Smart Grid investment.”
“Lofty words — but when it comes to changing people’s energy behavior, the smart meter revolution so far hasn’t been very revolutionary.”
“For now, … consumers largely remain ‘rationally inattentive’ to how much electricity they’re using at home, explains David Rapson, an economist at the University of California at Davis.  The information is just too obscure and difficult to obtain — and there are a lot of other ways to spend your day, as well as seemingly easier ways to save money.

The article tries to end on a positive note, rationalizing that there must still be a way to get some benefit out of these smart meters when it states:

“It’s not clear anybody should be blamed for the state of the smart meter revolution in the United States — turning a vast ship takes time.”

On March 12th, a news report from Oklahoma declared that “Smart Meters Called a Major Threat to Health, National Security.”  I don’t agree with the entire technical content of this particular article [*], but I do agree with the headline about smart meters being a threat to national security which leads to the next story on cyber security threats.
Industry Article on “Super Scary” Cybersecurity Issues
On March 12th, IntelligentUility.com reported that “Cybersecurity Is Super Scary” and summarized discussions that transpired last week at an “Automation and Power World (APW)” conference held in Houston, Texas:

“According to Norm Judah, chief technology officer with Microsoft Services, the most popular topics in the industry — or what he labeled the ‘shiny thing in the sky’ — changes.  Most recently, it’s been big data.  Now, it’s the Internet of Things.
“The scary thing about the Internet of Things is that it’s wildly insecure and unpatchable,” Judah told the audience.

One would have to ask, with all the risks, why are utilities irrationally rushing to deploy smart meters and enable them as part of the Internet of Things (IoT)?  Is it just that they don’t want to get left behind in the quest for the next “shiny thing in the sky”?  Note that, according a Gartner report released this past November, the utility sector will lead in the number enabled IoT connected devices by the year 2020 because of its investment in smart meters.

“We now have a more IT-focused criminal ecosystem,” warned Patrik Boo, a product manager with ABB during the “What do you need to know about cybersecurity?” session at APW.  “There are viruses out there — tons and tons of them — and they will wreck systems.   There’s no escaping that.”

Well, that is not really very reassuring.  Unfortunately, although the people at the conference seemed to acknowledge the tremendous cybersecurity threats and that you can’t put your “heads in the sand,” it did not seem to occur to them that companies should at least put their deployments on hold to better scope out the issues and work on possible solutions.   Instead  it was stated that there are “positives” that the smart grid can bring to consumers, and these supposed benefits are being “overshadowed” with security concerns and “indecisiveness” about what to do about those issues.
Jonathan Pollet, founder and executive director of Red Tiger Security, summarized the cybersecurity panel discussions by stating:

“What I advise more than anything is that we must stop surviving in the Jon Bon Jovi version of security — livin’ on a prayer.”

Final Analysis
So apparently the current state of affairs on cybersecurity is that we are “livin’ on a prayer” and that somehow we are going to take action to do better in the future and not ignore the problem.  With that sort of cybersecurity action plan, the results will likely be catastrophic … as things continue to also spiral out of control on the costs associated with smart meter deployments.
People in authority are shirking their responsibilities to act in a prudent manner that would protect the interests of the consumer and the well-being of our society and future generations.  Unfortunately, it appears to be up to informed activists and consumers to hold governments and corporations accountable for their actions and to force them to behave in a more responsible manner.
The distressing part of this whole situation is how valuable resources are being diverted and wasted on smart meters when the money could so easily be spent on infrastructure upgrades that would actually improve the grid and harden it against physical and cyber attacks as well as from the effects of solar storms, etc.  Instead, we are making the grid more vulnerable to catastrophic events by not spending the money where it needs to be spent and wasting it on smart meters.   It is truly an unbelievable pathway that we find ourselves.
Source Material for this Article
“UK Smart Meter Rollout Delays Are Costly – DECC Report,” at http://www.engerati.com/article/uk-smart-meter-rollout-delays-are-costly-decc-report
UK Smart Meter Failure Report
“Smart Meters Spiral,” at http://www.pressreader.com/australia/herald-sun/20150313/281938836390424/TextView
“Smart Meters Aren’t So Smart,” at http://fumingontarian.com/2015/03/smart-meters-arent-so-smart/
“Smart Meters Aren’t So Smart, Part 2,” at http://fumingontarian.com/2015/03/smart-meters-arent-so-smart-part-2/
“Tamper-proofing the Smart Grid,” at http://electronicdesign.com/blog/crosstalk-11/embedded/tamperproofing-smart-grid-74591
“Smart Energy Meters: Where’s the Savings?”, at http://jacksonville.com/news/2015-03-06/story/smart-energy-meters-wheres-savings
“Smart Meters Called a Major Threat to Health, National Security*,” at http://www.krmg.com/news/news/local/smart-meters-called-major-threat-health-national-s/nkTmJ/

[*]  Notwithstanding the many risks related to smart grid technology, SkyVision Solutions does not agree with the overly broad characterization expressed in the above linked article that “There’s nothing more dangerous than a smart meter on your house.”  For instance, what if you have a blocked furnace vent and carbon monoxide is building up in your home while you sleep?  In attempting to educate the public in a constructive manner on the specific risks related to smart grid technology, an exaggerated or sensationalized approach is probably not helpful to that end.  From a health perspective, although there is evidence of adverse effects in a portion of the population, we don’t yet know enough to say how “dangerous” smart meters might be in the long-term.  What we can say is that current RF exposure standards were never intended to protect against chronic exposure conditions and that no human health testing was performed prior to meter deployments.