Startup ‘Shield Your Body’ wants to save you from your cellphone 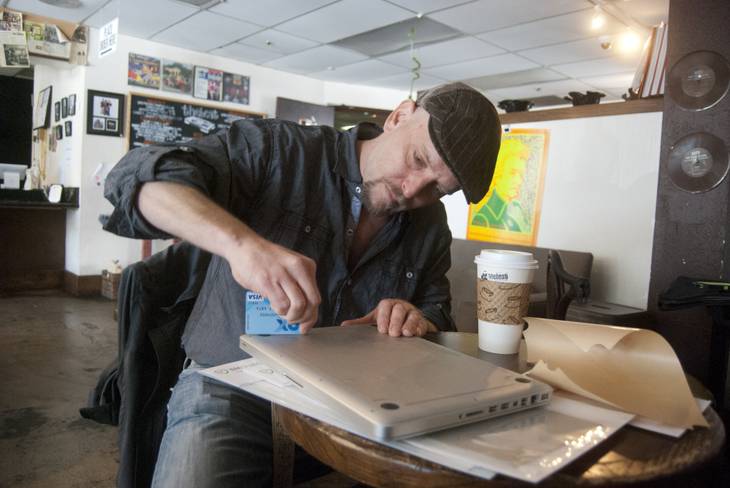 In the mid 2000s, a quirky question floated among new employees at Los Angeles-based software development company Almer/Blank: “Where's the microwave?”
That’s when those employees had to talk to the company’s founder, R. Blank. He’d tell them all the same thing: If he has any say in it, you’ll never find a microwave in his office. They’re bad for you.
These days, Blank launches into discussions about electromagnetic radiation often. While EMF is naturally produced by Earth and the human body, artificial EMF is also produced by human technologies, like hair dryers, microwaves and cellphones. Blank contends those invisible rays do a lot of damage to the human body.
So perhaps it’s no surprise that Blank, 38, founded Shield Your Body, a tech company planning to re-incorporate in Las Vegas next year with a line of products to protect consumers from their cellphones, laptops and other wireless devices.
How much damage can a cellphone do? Scientists are divided. Some studies have found that cellphones can emit enough electromagnetic energy to destroy DNA, cause cancer and lead to infertility. Other scientists say it’s not that much of a problem.
Electrahealth.com Editor Note: A collection of clear, persuasive, peer-reviewed studies can be found on our site under Research and in the internationally-compiled BioInitiative Report.
The Cleveland Clinic recently released a report that found the rays produced by cellphones are a leading cause of male infertility, because electromagnetic radiation damages sperm.
“We've done a lot of research on cellphones,” wrote Dr. Edmund Sabanegh, of the Cleveland Clinic’s urology department, in the report. “In studies where we directly exposed sperm to cell phone radiation, it did damage the sperm.”
Either way, products like Shield Your Body are part of a growing trend as more and more people are becoming wary of cellphones’ effects on health.
In July of this year, a city councilman in Berkeley, Calif., launched a campaign to make his city the first in the nation to require cellphone makers to put stickers on their products warning that they can cause cancer. A similar campaign launched in San Francisco in 2010, but the ordinance was struck down two days later in federal court.
Shield Your Body is not the first company with products to protect consumers from electromagnetic frequencies, but most other companies target pregnant women.
Founded in Los Angeles in 2013, Shield Your Body has developed products like the “Pocket Patch,” which is made of a special high-quality cotton weaved with nickel and silver to deflect the type of radiation that’s harmful to the human body. A 3-pack of the patches run $15 and are meant to be sewn into clothing.
Then there’s the “Laptop Skin,” made for the 13-inch MacBook Pro and MacBook Air. It costs $45, and can be stuck to the bottom of a laptop with a built-in adhesive strip.
On the back of every product is a printed explainer: “Shield Your Body uses advanced materials to reduce your personal exposure from the bottom of the laptop, deflecting up to 95 percent of WiFi microwaves from your lap and reproductive organs.”
Raised in a family of academics and scientists, Blank took an early interest in computers and programming. In high school, he learned BASIC, a beginner's programming language. He then went on to learn HTML and Flash on his own, setting himself up as a freelance coder and website developer.
He later opened Almer/Blank, designing phones apps and websites for major companies like Apple.
But it wasn't until he helped his father, Martin Blank — a well regarded scientist at Columbia University — write a book about the dangers of electromagnetic radiation that he became interested in protecting people from EM radiation.
He grew up in a home without microwave. His father, now 81, just got his first cellphone three weeks ago.
“I didn't understand it back then,” Blank said. “I do now.”
Blank started Shield Your Body after earning an MBA from UCLA. Blank did not seek out investors to fund his company; he used profits generated by Almer/Blank to get the company off the ground. While he would not disclose how much money the duo put into the company, Blank said it’s in the six figures.
Though avoiding investors seems like an unconventional, anti-Silicon Valley tactic, Blank said he prefers it because there’s so much less pressure.
“Investors’ growth expectations these days are just unrealistic,” he said over coffee at The Beat Coffeehouse in downtown Las Vegas.
With a family of his own in Las Vegas, Blank prefers to do things at his own pace. Right now, he and his business are working on a new product — a baby blanket.
Share |
Previous Post
Next Post
comments powered by Disqus