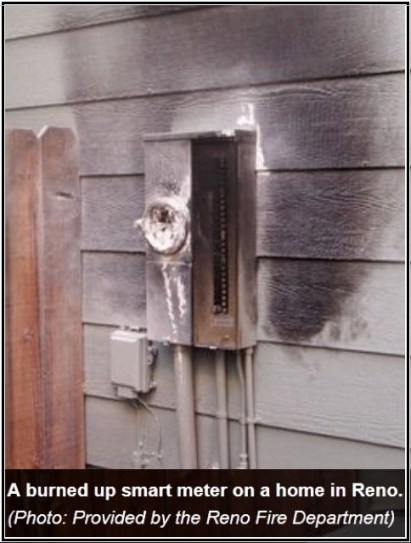 Nevada state regulators decided Monday to launch a preliminary investigation into whether the 1.1 million smart meters installed on homes across the state by NV Energy pose a fire danger, demanding the utility turn over data on meter failures, the number of fires associated with the meters, any lawsuits involving the meters and internal investigation documents on meter fires.
The request for information comes after the Reno and Sparks fire chiefs raised the alarm on a series of fires they say are linked to smart meters in their cities, including the most recent blaze that killed a 61-year-old Reno woman.
"Given the lingering safety question presented by the Reno and Sparks fire departments' expert, staff believes it would be prudent for the commission to gather some information from NV Energy regarding any fires which have occurred where NV Energy equipment may have been involved," the PUC's lawyer Tammy Cordova wrote in an order compelling NV Energy to turn over documents. "Staff believes this information is required to ascertain whether any further inquiry is necessary."
Fire investigators have documented nine fires in Reno and Sparks since 2012 that they say originated at the smart meter.
Most of the fires caused minimal damage, destroying just the meter and blackening the outside wall of the home. One fire, however, destroyed most of a Sparks family's home. Another left a man with moderate burns on his face.
A forensic expert hired by the fire departments examined four of the meters and concluded that a "common failure mode" could not be ruled out in the blazes.
In each case, NV Energy said the either smart meter was not the cause of the blaze or they are still investigating the exact cause of the ignition.
In the two fires that caused the most damage, NV Energy hired its own investigators, who concluded the smart meters were not at fault.
But staff with the Public Utilities Commission, which is charged with regulating NV Energy, said further investigation is warranted.
The order filed Monday asks NV Energy to turnover information detailing any problems with fires dating back to 2000, which would allow the commission to compare whether the company's new smart meters pose more of a fire danger than traditional analog meters.
With the help of a $130 million federal grant in 2010, NV Energy began replacing the old meters with so-called smart meters, which wirelessly transmit information on a customer's power use every 15 minutes.
More than 1.1 million smart meters have been installed on homes and businesses across the state.
NV Energy has 60 days to provide the information to the Public Utilities Commission.
Reno Fire Chief Michael Hernandez, who joined with Sparks Fire Chief Tom Garrison to request the PUC investigate the safety of the meters, said he's pleased with the decision to launch an inquiry into the blazes.
"The safety of our community is paramount," Hernandez said. "Every member of our community deserves to know they are safe. We look forward to working with the PUC and NV Energy to ensure the safety of our community."
Share |
Previous Post
Next Post
comments powered by Disqus