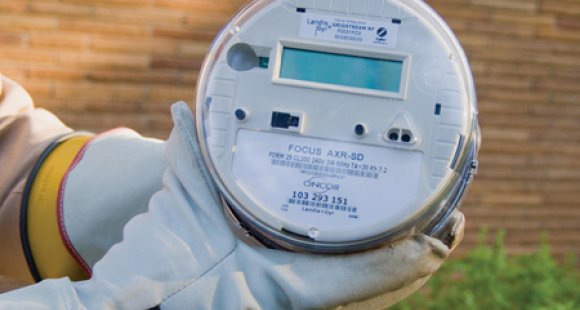 PALO ALTO, CA -- The experiment of some doctoral students at Stanford is raising questions about the accuracy of PG&E's new SmartMeters. People all over the state have been complaining about them.
Like so many others, the students' PG&E bill showed spikes in their energy usage right about the same time their SmartMeter was installed. The bio-engineering and biology graduate students became alarmed when their bill hit a high of almost $400 at their apartment in Menlo Park.
The roommates gathered around the computer to try to figure out why. Their persistence and experimentation helped them get some answers.
"We put in lower wattage bulbs. We were making sure all the lights were off, all the electricity was off whenever we were out of the house," said Andreina Parisi-Amon.
Still, their energy usage remained high and it continued to be that way even when they left for Christmas break.
"When we were gone for the week, we turned off all the circuit breakers, and so we were expecting to see a pretty low baseline in energy usage for that week," Izumi Hinkson recalled.
They created a chart using information supplied by PG&E. It shows spikes in energy usage when no one was home even with the circuit breaker turned off.
The co-eds took their complaints to PG&E and their landlady. PG&E told them they were using more energy than they thought.
"When we would communicate with PG&E, they had no real reason to explain why it was so high," said Parisi-Amon.
The landlady responded by giving her tenants their own way to monitor their energy use; she bought them a TED 5000.
The device gives them instant readings of their energy use for the entire apartment. When the toaster is turned on, the energy reading immediately spikes. When the toaster is turned off, the reading drops.
Matt Wakefield is with the industry-funded Electric Power Research Institute. He told ABC7 by phone that he also uses the TED and called it a "reliable tool." The TED is basically a consumer version of PG&E's SmartMeter. Wakefield said it has an error rate of plus or minus 2 percent.
It could give the students the answers they wanted about their SmartMeter.
"At least we have something to compare it to and have some sort of validation," Hinkson said.
The comparison seemed to confirm their suspicions. A blue line on their chart represents the energy readings from the TED for the last six weeks. A red line represents the energy readings covering the same time period, but measured by the SmartMeter. Those energy readings are nearly 2.5 times greater than those measured by the TED.
"It doesn't necessarily prove either of these methods is correct, but it does raise the question about whether or not the SmartMeter readings are accurate and valid," Hinkson said.
7 On Your Side contacted PG&E and it sent out three technicians to investigate. They blamed the problem on an installation error. It seems the students' meter got mixed up with their neighbors. PG&E says the students were paying their neighbors bill and vice versa.
"We do want to apologize to the customer for what happened," PG&E spokesman Jeff Smith said. "We'll take whatever steps are necessary to make sure that she is taken care of and any restitution that needs to take place will take place."
The students will receive a refund of $1,600. They are grateful for the refund, but say some of their original questions about the SmartMeter remain.
"I'm really glad that you guys helped us out and also that you were able to stir up enough commotion in this to get them to move their feet on this issue," said Hinkson.
PG&E has so far admitted that 23,000 SmartMeters have been installed incorrectly.
Share |
Previous Post
Next Post
comments powered by Disqus