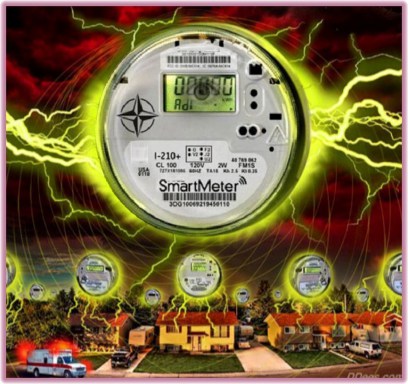 An article was just published in the November/ December 2014 issue of the journal Alternative Therapies in Health and Medicine, entitled:
“Self-Reporting of Symptom Development from Exposure to Radiofrequency Fields of Wireless Smart Meters in Victoria, Australia: A Case Series,” by Dr. Federica Lamech, MBBS.
No health impact studies were performed prior to the deployment of wireless smart meters. This new article showing a correlation between the introduction of smart meters and the onset of adverse health outcomes strengthens the need for independent research on the potential health impacts of this technology on the population.
The abstract for this article reads as follows:

Context
In 2006, the government in the state of Victoria, Australia, mandated the rollout of smart meters in Victoria, which effectively removed a whole population’s ability to avoid exposure to human-made high-frequency non-ionizing radiation.  This issue appears to constitute an unprecedented public health challenge for Victoria.  By August 2013, 142 people had reported adverse health effects from wireless smart meters by submitting information on an Australian public Web site using its health and legal registers.
Objective
The study evaluated the information in the registers to determine the types of symptoms that Victorian residents were developing from exposure to wireless smart meters.
Design
In this case series, the registers’ managers eliminated those cases that did not clearly identify the people providing information by name, surname, postal address, and/or e-mail to make sure that they were genuine registrants.  Then they obtained consent from participants to have their de-identified data used to compile the data for the case series.  The author later removed any individual from outside of Victoria.
Participants
The study included 92 residents of Victoria, Australia.
Outcome Measures
The author used her medical experience and judgment to group symptoms into clinically relevant clusters (e.g, pain in the head was grouped with headache, tinnitus was grouped with ringing in the ears).  The author stayed quite close to the wording used in the original entries.  She then calculated total numbers and percentages for each symptom cluster.  Percentages were rounded to the nearest whole number.
Results
The most frequently reported symptoms from exposure to smart meters were (1) insomnia, (2) headaches, (3) tinnitus, (4) fatigue, (5) cognitive disturbances, (6) dysesthesias (abnormal sensation), and (7) dizziness.
The effects of these symptoms on people’s lives were significant.
Conclusions
Review of some key studies, both recent and old (1971), reveals that the participants’ symptoms were the same as those reported by people exposed to radiofrequency fields emitted by devices other than smart meters.  Interestingly, the vast majority of Victorian cases did not state that they had been sufferers of electromagnetic hypersensitivity syndrome (EHS) prior to exposure to the wireless meters, which points to the possibility that smart meters may have unique characteristics that lower people’s threshold for symptom development.

Reference: Altern Ther Health Med. 2014; 20(6): pp 28-39.
Author: Federica Lamech, MBBS, a medical practitioner in Melbourne, Victoria, Australia.
Selected Article Quotations
The published article is copyrighted and for purposes of this blog article just seven short sections of the 12-page paper will be offered as “representative” content of the article and as “fair use” by SkyVision Solutions.   Others should not feel at liberty to quote what follows who have not purchased the original article or who have not received permission from the author or publisher to reproduce same:

“[B]elief is increasing in the concept that intermittent pulses of radiofrequencies, such as those used in the smart grid, are more biologically significant compared with constant-type exposures, even when the time-averaged exposure is miniscule.  This kind of signal is biologically active and not invisible to the human body and its proper biological functioning, because the unpredictable pulses disrupt the synchronized biological oscillations within cells.  The Austrian Medical Association recommends that such periodic signals should be critically evaluated, whereas nonperiodic signals may be considered more leniently.”
“As Figure 2 shows, the most common symptoms [in this case series] were:
(1) insomnia, sleep disturbance, or sleep disruption — 44 people (48%);
(2) headaches, head pain, or dull head — 41 people (45%);
(3) tinnitus, ringing in the ears, or buzzing/noises in the ears — 30 people (33%);
(4) tiredness, lethargy, or fatigue, including chronic fatigue, exhaustion, or weakness — 29 people (32%); and
(5) cognitive disturbances, inability to concentrate or think, disorientation, or memory loss — 28 people (30%).” 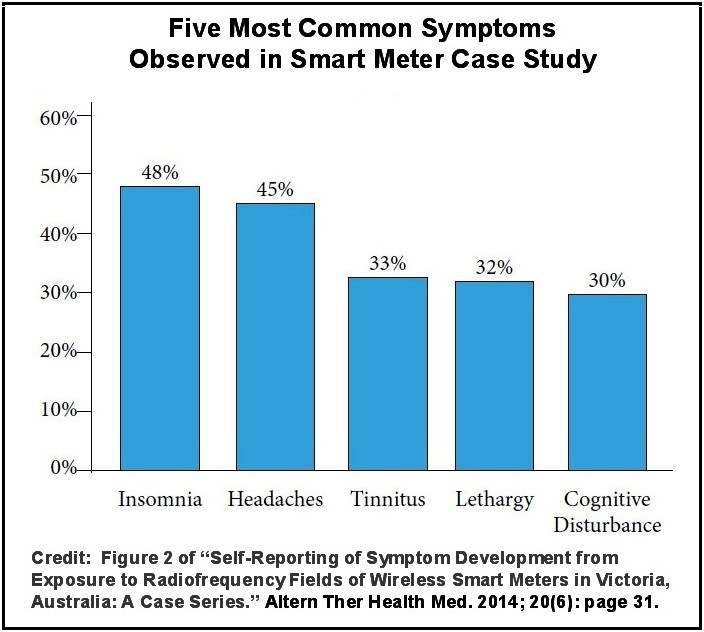 “Interestingly, only 8% of the participants in the current study stated that they had suffered from EHS prior to exposure to smart meters, which suggests that the threshold for symptom development appears to be significantly lower when it comes to wireless meters compared with that for other wireless devices.”
“Of an initial 142 people who had formally registered their adverse health effects from smart meters related to the current study, 92 consented to participation.  The author considers this number to be significant and most likely to represent the tip of the iceberg in terms of total numbers.”
“The main limitation of the current study is that, being a case series, it is a descriptive, retrospective study that does not have a control arm and can therefore help formulate a new hypothesis, but can only make limited statements on the causality of correlations observed.”
“The author of the current study offers the hypothesis that some people can develop symptoms from exposure to the radiofrequency fields of wireless smart meters.  This hypothesis cannot be disproven without further assessment of the affected individuals and the electromagnetic fields in which they live.”
“Until more knowledge is accumulated and until this type of wireless technology can be proven safe, the author believes that communities should use a cautionary approach, asking for a moratorium on deployment of wireless smart meters and smart grids and for the use of safer technologies for smart meters, such as hardwiring, fiber optics, or other nonharmful methods of data transmission, including reading of meters by meter readers.”

A Perspective by David O. Carpenter, MD via Another Published Article [*]
“The report by Lamech is valuable for several reasons.  It provides support for the possibility that a sudden increase in RF exposure — in this case from smart meters — results in the development of EHS [Electrohypersensitivity].  This observation is consistent with [other] reports … and suggests that the syndrome can be triggered in susceptible individuals by an unusual or intense exposure to EMFs and perhaps to electric current.  The Lamech report also raises the important question of what characteristics of smart meters, compared with other sources of RF, may be responsible for provoking EHS.”
[*] Reference: “Excessive Exposure to Radiofrequency Electromagnetic Fields May Cause the Development of Electrohypersensitivity,” by David O. Carpenter, (Altern Ther Health Med. 2014;20(6):pp 40-42.) Refer to: http://www.ncbi.nlm.nih.gov/pubmed/25478802#.
Smart Meter Public Health Nightmare versus the Nocebo Effect
The Lamech article itself makes mention of an article written by Don Maisch, Ph.D. published in 2012, entitled, “Smart Meter Health Concerns: Just a Nocebo Effect or an Emerging Public Health Nightmare?”
Dr. Maisch believes that there are two reasons for the “dismissive attitude to the possibility of adverse health effects from smart meter RF emissions.”  The first reason deals with the continued reliance on outdated government exposure guidelines that only recognize thermal effects such as burns and electrical shocks.
The second is based upon the findings of poorly designed provocation studies conducted on people who self-identify themselves electrically sensitive.  Such studies, as stated by Dr. Maisch, “limit the definition of electrosensitive persons to those who claim that they can feel when they are being exposed.”  This means, like a light switch going “on” and “off,” the person is expected to have a particular sensation that will suddenly be sensed and then not sensed in response to a specific RF signal used in the provocation study.  Again, as stated by Dr. Maisch, “This definition excludes the possibility that there may be people who are adversely being affected by EMR exposure but cannot feel when they are being exposed.”
Most importantly, Dr. Maisch concludes:

“From a public health perspective, the suggestive evidence that smart meter RF emissions may be having an adverse health impact calls for an urgent research effort. Even if the number of affected people is small, the sheer number of people exposed represents a potential significant public health risk.  To simply dismiss this possibility as just a nocebo [harmless] effect without a serious research effort is inexcusable.”

Other Studies
Although there have been no health impact studies demonstrating the safety of wireless smart meters prior to deployment, there have been at least limited studies subsequent to deployment indicating ill-effects from smart meter exposure.  One such study is the Australian study just highlighted.  Two other studies are listed below with associated links:
Call for Moratorium on the Deployment of Wireless Smart Meters
Partially on the basis of the Lamech  case series work (and before the peer-review process was complete for the now published article), the American Academy of Environmental Medicine (AAEM) last year called for a moratorium on the deployment on smart meters in favor of using safer technology.  Refer to “Wireless Smart Meter Case Studies.”
Commentary: I would suppose at this point most people are still waiting for that moratorium to be put into effect.
Share |
Previous Post
Next Post
comments powered by Disqus