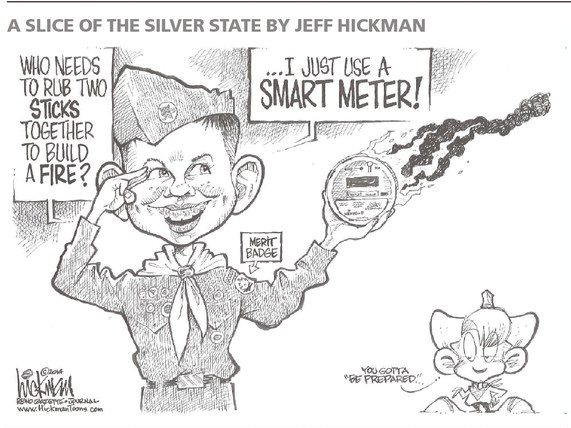 In California and around world, smart meters have been linked to fires, explosions, and damaged appliances.  For every fire started at the meter, in an appliance, or on wiring, smart meter causality should be suspected.
There has been a recent spate of fires in Guerneville, California which some people have blamed on the homeless.  The cause of the fires are still under investigation, but some have been linked to electrical wiring, faulty heaters, and possibly arson.  The link to smart meters has not been investigated.
A Pacific Gas and Electric (PG&E) whistleblower Pat Wrigley, who worked as a meter reader for 9 1/2 years testified at California Public Utilities Commission judicial hearing.  He stated:  “Smart meters cause fires” and “PG&E is covering up the risk”.
Two California  fire captains contacted us about two different types of problems from smart meter arcing.
Matt Becket’s refrigerator motor intermittently sped up and their lights became brighter.  He said, “As a seventeen year veteran and current Fire Captain this caused me to become very concerned.”  The smart meter on his house was replaced with an analog, and there were no problems, until a new smart meter was reinstalled.  This time he had two surge protectors burn out.
Another fire captain Ross writes, “I was at home doing yard work in the late afternoon when my wife came outside and told me that “half the power was off again”. This had been happening on and off for about two weeks … I then went outside to where my meter was and I could instantly smell the burnt electrical smoke. As I was looking at the meter I inadvertently placed my hand on the meter itself and almost burned my hand.”
Despite the above claims from knowledgeable whistleblowers, and media reports linking smart meters to fires and explosions, this issue has not received the serious attention it deserves.
The California Public Utilities Commission (CPUC) is charged with overseeing utility safety.  They knew about the risk of smart meter fires in 2009, and their staff investigated in 2013.  The CPUC told the Governor and Legislature they found no problem.  If there’s no problem, why aren’t the details of their investigation public?  Why did they wait four years to investigate?
PG&E states they are now monitoring temperature and voltage readings of smart meters for hazardous conditions, which proves there’s a problem. If there was no problem they would not need to monitor these conditions.
Please see the Summary of Evidence on Smart Meter Fires which is culled from the EMF Safety Network Smart Meter Fires and Explosions page and documents this hazard with links to more information.  We have been tracking smart meter fires since 2010.
Electrahealth.com Editor Note: Use this meter to detect RF radiation that may be affecting your health!
Share |
Previous Post
Next Post
comments powered by Disqus