Posted by Bob on 1/21/2014 to "Smart" Meters
Original Source
This posting represents a “re-blog” of a posting from the “Maryland Smart Meter Awareness“ website, plus some added remarks based upon content of the referenced testimony about a smart meter health effects survey.
Symptoms Resulting from Exposure to Radiofrequency/Microwave Radiation from Smart Meters; by Ronald M. Powell, PhD [1], January 13, 2014
In February 2013, the expert testimony [2] of Richard H. Conrad, PhD [3], and many other experts worldwide, was submitted to the Maine Public Utilities Commission when the Commission was considering the future of Smart Meters in that state.  Dr. Conrad reported the results of a survey of 210 individuals who had experienced symptoms resulting from exposure to Smart Meters.
[As described in the expert testimony, a “Smart Meter Health Effects Survey” was conducted by Dr. Richard H. Conrad.   The purpose of the survey "was to develop reliable data much more solid than ordinary anecdotal evidence, about possible smart meter health effects, and their time-line ...”
According to Dr. Conrad, “the survey results provide very strong evidence that smart meters are causing painful and debilitating new symptoms in many previously normal healthy people, and causing them to become electrically sensitive to a whole range of electronic devices including Wi-Fi, cell phones and computers.  Because of exposure to smart meters, people are becoming electrically sensitive at an unprecedented rate. ...”]
What the survey does and does not tell us
The survey does not address the frequency of occurrence of symptoms in the general population when exposed to Smart Meters.  So the survey does not tell us how likely it is that a person in the general population will experience symptoms after exposure to Smart Meters.  But the survey does tell us what types of symptoms are being experienced by those who do become symptomatic after exposure to Smart Meters.
Individuals who reported previous symptoms that worsened to severe
Appendix 2 of Dr. Conrad’s report shows the number of persons, out of the 210, who reported

A copy of Appendix 2 is below.
Individuals who reported new symptoms
Appendix 3 of Dr. Conrad’s report shows the number of individuals, out of the 210, who reported symptoms that were new, that is,

“… symptoms suffered for the first time in their lives, symptoms they had never experienced before smart meters [5]

and that were either severe or moderate in intensity after exposure to Smart Meters.  A copy of Appendix 3 is also below.
Causality
Because the symptoms in both Appendix 2 and Appendix 3 can have causes other than exposure to Smart Meters, the survey included an extensive list of questions designed to determine whether Smart Meters were the cause.  Only individuals whose answers were persuasive of a causal connection were included in the survey results.
Symptoms versus biological effects more broadly
Symptoms, as that term is used here, are biological effects that can be sensed.  But an absence of symptoms does not mean an absence of biological effects.  Many of the biological effects associated with radiofrequency/microwave radiation either cannot be sensed at all, such as a loss of male fertility, or cannot be sensed until an advanced state of disease has been reached, such as cancer.  A broad range of biological effects, both those that can be sensed and those that cannot be sensed, have been researched extensively by the international biomedical research community.  The findings are described in detail in two comprehensive reviews of the resulting published research literature. [6,7]
Appendix 2 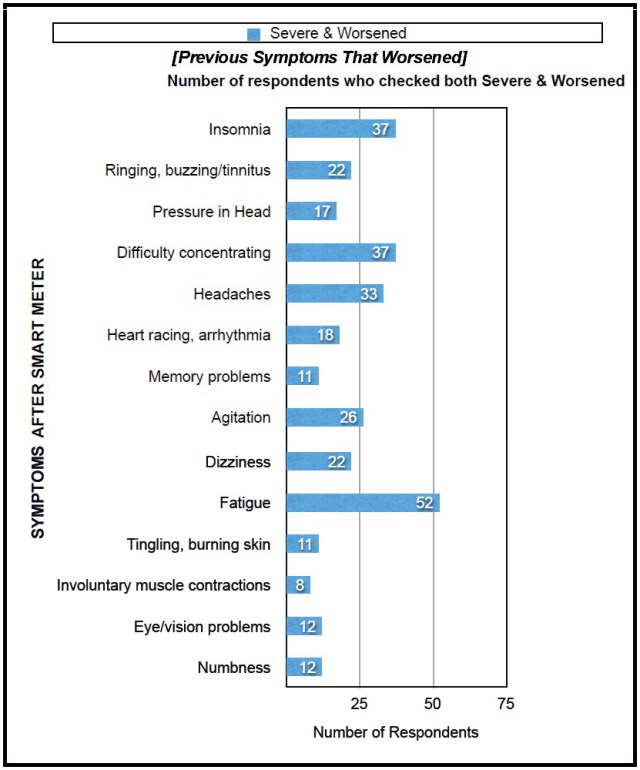