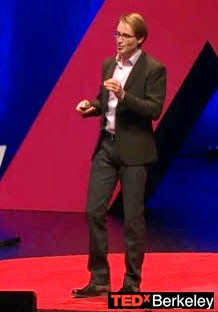 On February 6th, Jeromy Johnson, an expert in mitigating the negative impacts of Electromagnetic Field (EMF) exposure, was featured as a speaker at the TEDxBerkeley event for 2016.  The title of the presentation was “Wireless Wake-Up Call.”
Jeromy Johnson acknowledges that the growth of wireless technologies in our world has provided tremendous benefits to society, but it has also created substantial health risks. Johnson explains how he became sensitive to EMF radiation in 2011 and recommends that we head toward a more wired world in the future.  He particularly believes that one of the best things we can do is move towards fiber optics.
“If smart meters had been designed to use either fiber optics or to emit just once or twice a day, … then I wouldn’t be standing here today and thousands upon thousands of people around the world would not have been injured by smart meters.”
Continue reading article...
Electrahealth.com Editor Note: Use this meter to detect RF radiation that may be affecting your health!
Share |
Previous Post
Next Post
comments powered by Disqus