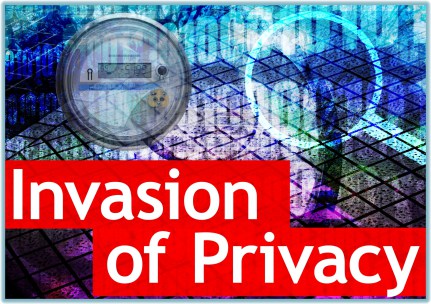 This past March, SkyVision Solutions released a report entitled, “A Perspective on How Smart Meters Invade Individual Privacy.”
The report has now been updated with new information regarding investor owned utilities (IOUs) as well as addressing a White House report concerning “big data” issued in May 2014.
Summary Conclusions
The 75-page report issued by SkyVision Solutions is likely the most comprehensive document of its kind on the topic of smart meter privacy invasions.  Through a step-by-step logical approach, it is demonstrated that the collection of incremental energy-related data for residential electric customers using smart meters represents an unreasonable invasion of privacy and, for applicable jurisdictions, constitutes an unreasonable search in violation of the Fourth Amendment of the United States Constitution.
Based upon the information presented in the updated privacy document, it is established  that utilities expose consumers to unnecessary risks by collecting massive amounts of smart meter-related data not necessary for billing purposes simply because “they can” and do so without regard to consumer privacy and security interests.
Smart meter data, consisting of granular, fine-grained, high-frequency type of energy usage measurements, can be used by others either maliciously or inadvertently using existing or developing technology to infer types of activities or occupancies of a home for specific periods of time.  Analysis of granular smart meter energy data results in or may result in:
More specifically, analysis of smart meter data or manipulation of smart meter data/firmware can be used for the following purposes:
With regard to informing consumers of smart grid risk-related information, utilities and manufacturers have no incentive to inform consumers of these risks since such action would create an even greater consumer backlash against the deployment of the smart grid technologies.  Risk-related information is being deliberately suppressed by the smart grid industry, and the public is being provided misinformation which would indicate that there are no additional privacy or security risks related to smart meters as compared to the old analog meters.
Smart Meter Privacy Invasions by Investor Owned Utilities (IOUs)
It is broadly stated that the Fourth Amendment applies only to acts by the government.  However, if an investor owned utility (IOU) company is ordered by a state public utility commission to install privacy invading smart meters as part of a mandate or otherwise ordered to charge a penalty fee for those refusing smart meters, then the private utility arguably becomes an “instrument or agent of the state” and must abide by Fourth Amendment provisions.
The legal argument runs along the lines that if the state public utility commission orders the utility to record larger quantities of data than is customary, then Fourth Amendment provisions apply.  A key point in the argument is that the “customary” data set is that necessary for calculating a monthly utility bill, i.e., a once per month meter read.  When a private “investor-owned” utility is ordered by a state public utility commission to install granular data collecting smart meter technology and/or to charge tariffs for those customers refusing such installations, then such orders constitute “state action.”  As such, the state utility commission and private utility company are now subject to the limitations of the Fourth Amendment.
If the actions are further determined to constitute an unreasonable invasion of privacy, then those organizations have violated the Fourth Amendment rights of the affected customers.
The White House Report on Big Data and Privacy
In May 2014, a White House report was issued from the Executive Office of the President, entitled, “Big Data: Seizing Opportunities, Preserving Values.”
Somewhat remarkably, if one reads the White House report and a referenced paper to be quoted below, one will discover that the content is consistent with the assertions of the privacy report prepared by SkyVision Solutions.
The White House report recognizes the necessary protection of citizen privacy interests where it states:

“A legal framework for the protection of privacy interests has grown up in the United States that includes constitutional, federal, state, and common law elements. ‘Privacy’ is thus not a narrow concept, but instead addresses a range of concerns reflecting different types of intrusion into a person’s sense of self, each requiring different protections.”

“Big data” is described as “large, diverse, complex, longitudinal, and/or distributed datasets generated from instruments, sensors, Internet transactions, email, video, click streams, and/or all other digital sources available today and in the future.”  Such data would include information collected from utility smart meters, and it was recognized that privacy would be affected by such data collection where the White House report states:

“Power consumption data collected from demand-response systems show when you move about your house.”

“We explore the privacy issues implicated by the development of demand response systems.  We begin by highlighting the invasive nature of fine-granularity power consumption data, showing that the data collected by Advanced Metering Infrastructure (AMI) reveals detailed information about behavior within the home.”

“It has been shown that the detailed power consumption data collected by advanced metering systems reveals information about in-home activities.  Furthermore, such data can be combined with other readily available information to discover even more about occupant’s activities.”

[Commentary:  In contrast to minimizing data collection, most utilities appear to be collecting as much data as the purchased equipment can handle.]

“In any case, the utility’s need for consumption data should not be at the level of the individual consumer.”

[Commentary:  As indicated in the paper, the utility has no need for consumption data at the level of the individual consumer; therefore there is no basis for its collection and retention unless explicit consent is received from the customer.]
What about this quote from the paper?

“Consumers may become alarmed at the privacy risk, motivating legislation calling for an expensive retooling of the system.  Judicial action may also put the program at risk.  Whether from public outcry or judicial action, systems that forsake privacy-awareness may find themselves shut down.”

As one can easily see, utilities are deploying smart meters in total disregard of the guidance provided above, ignoring and denying the privacy concerns and interests of consumers, thereby putting them at risk.  So, based upon the words in the above referenced paper, we need a “retooling of the system.”
Utilities must immediately change course and respect the rights of the consumer.  Otherwise, as stated in the Wicker and Thomas paper, those “that forsake privacy-awareness may [and should] find themselves shut down.”
Could the risks not be more clear?  It is not like I am making this stuff up.  I am just quoting information right from a paper referenced in a recently released White House report on “Big Data” from the “Executive Office of the President.”
Other selected quotations in the updated privacy document released by SkyVision Solutions include the following:

“[N]ew data flow [from smart meters] removes a structure that once afforded privacy protection for in-home activities (that is, the walls, combined with a low level of detail about energy consumption) and replaces it with a system that breaches the home’s walls and exposes real-time consumption data.”
“[E]ven the simplest data mining and pattern-matching tools can convert power consumption data into information about events within ‘the sacred precincts of private and domestic life.’”

Wake up people and be a part of the solution mentioned in the Wicker and Thomas paper, whether it be motivating legislation, judicial action, or just holding your utility commission and utility company accountable for ignoring your rights.
Let us protect the “the sacred precincts of private and domestic life” for ourselves and our children.  At the very least from a privacy perspective, explicit consent of the customer/citizen must be required prior to granular usage data collection by the utility.  Beyond that of course, when one takes into account the various other significant risks related to “advanced” metering, the entire program needs to be  halted in its tracks and completely “retooled.”
———————————–
To download the fully updated privacy invasion report by SkyVision Solutions, click on the hyperlink:  Utility Smart Meters Invade Privacy.
Share |
Previous Post
Next Post
comments powered by Disqus