Posted by Bob on 6/24/2014 to Wireless
Original Source
Luis Hernan has produced a series of photographs that show the strength of wireless signals according to color.
He’s also produced an app that can be downloaded to a smart phone which can act as a very basic EMF detector. The app is free.
I spoke to Luis yesterday about his device and how he produced these photos.  Here is the color code Luis used so you can understand his photos:
Here are Luis’s photos and underneath are my comments: 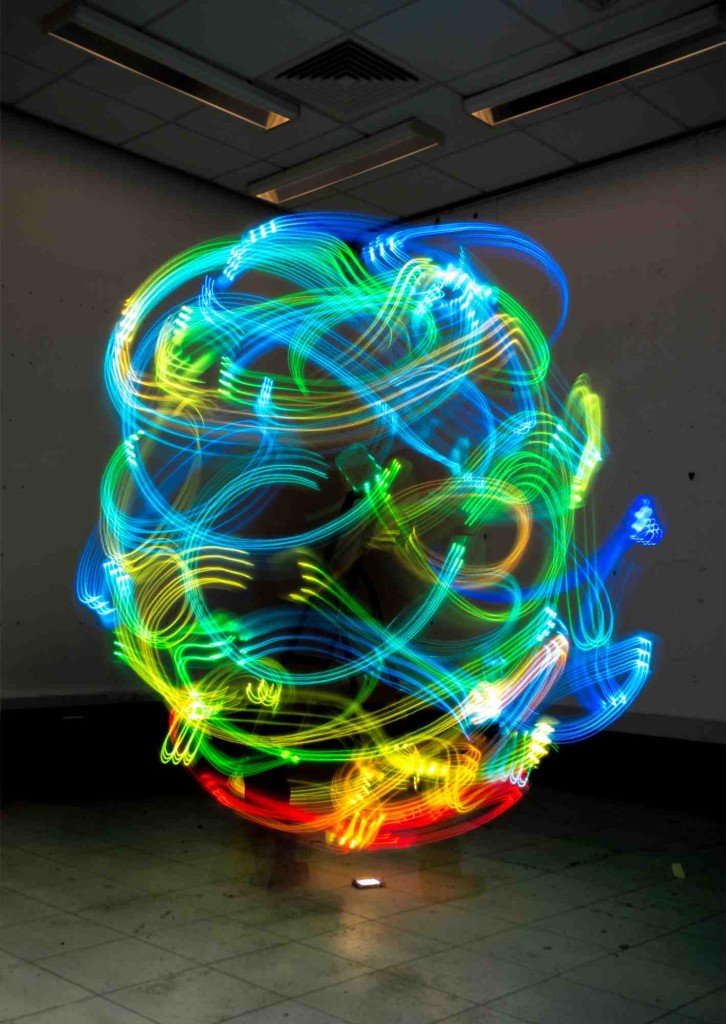 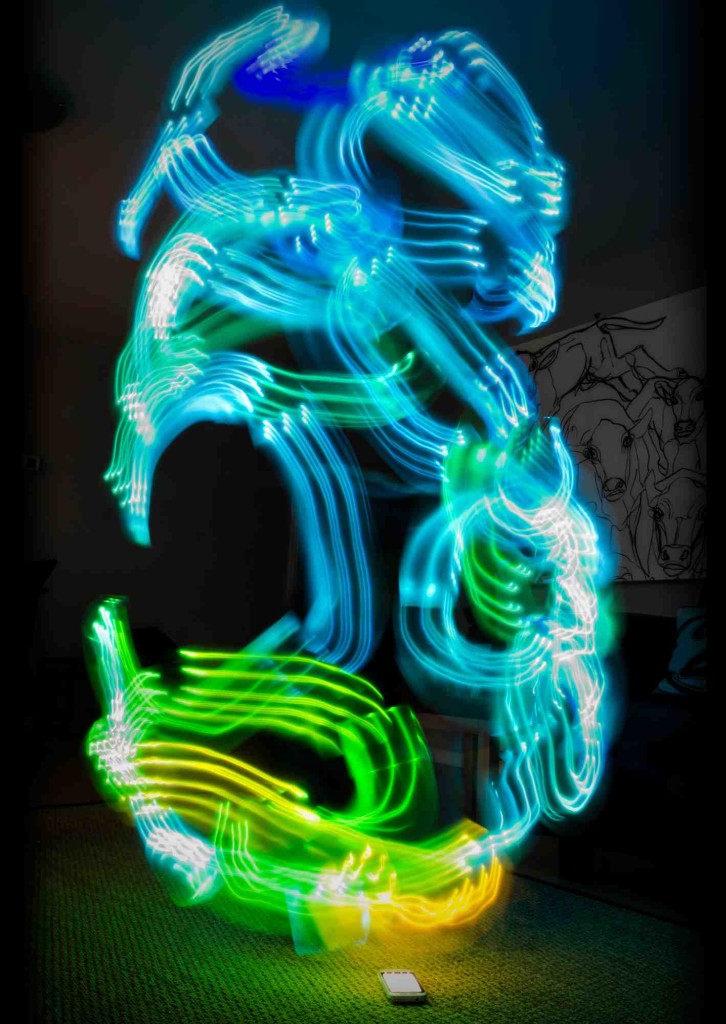 Cell phone in WiFi mode – although the majority of weak signals are found furthest away from the phone there are some weak signals quite close
Wifi radiation at building entrance – interesting to see about halfway up the steps there is less WiFi radiation than further away from the building and then the radiation gets stronger as you go nearer to the entrance.

WiFi radiation on a domestic staircase – not surprisingly the WiFi router is in the cupboard on the left under the telephone. 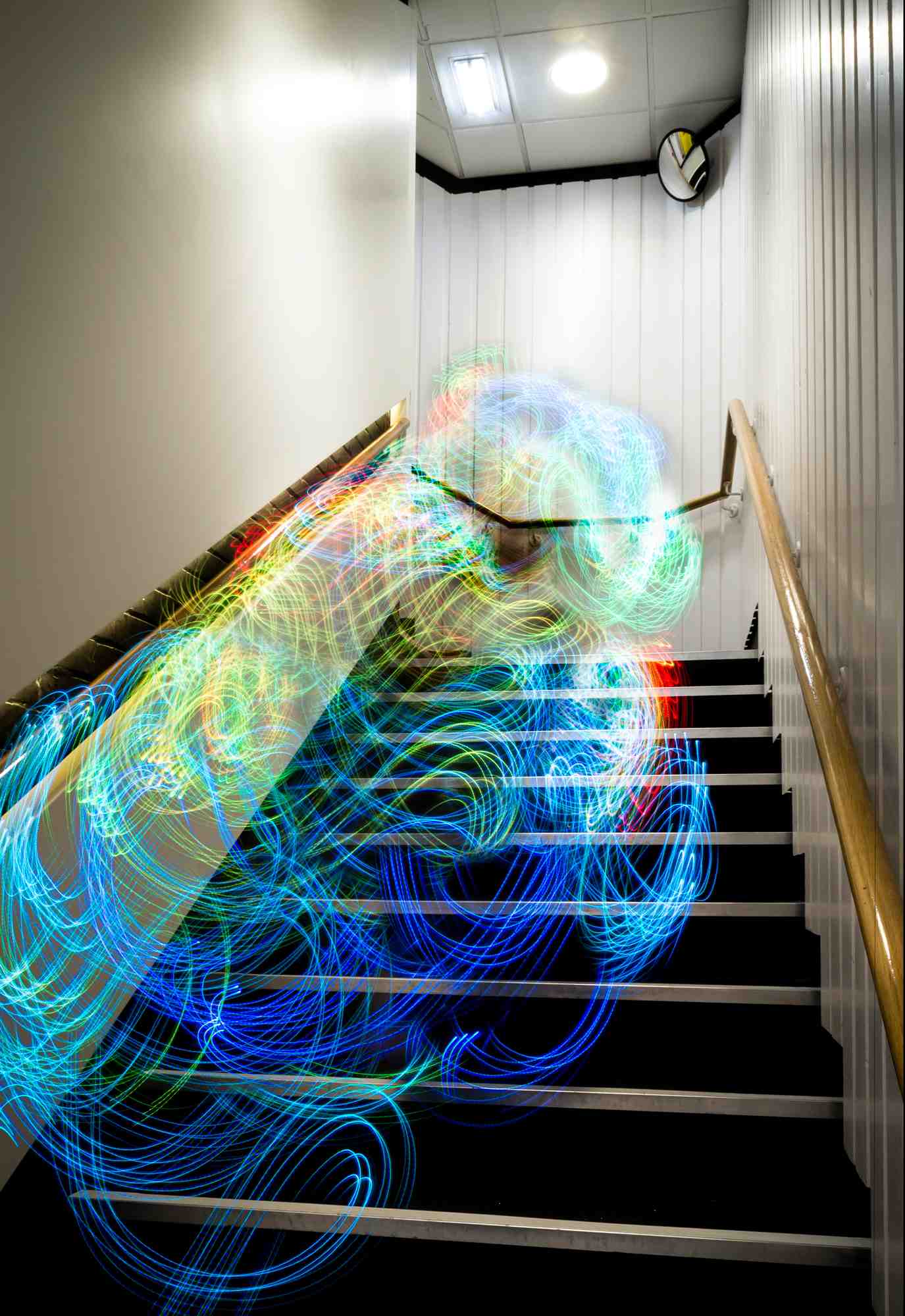 WiFi radiation on an office staircase – the distribution of the colors suggest the WiFi router is situated on the next level. 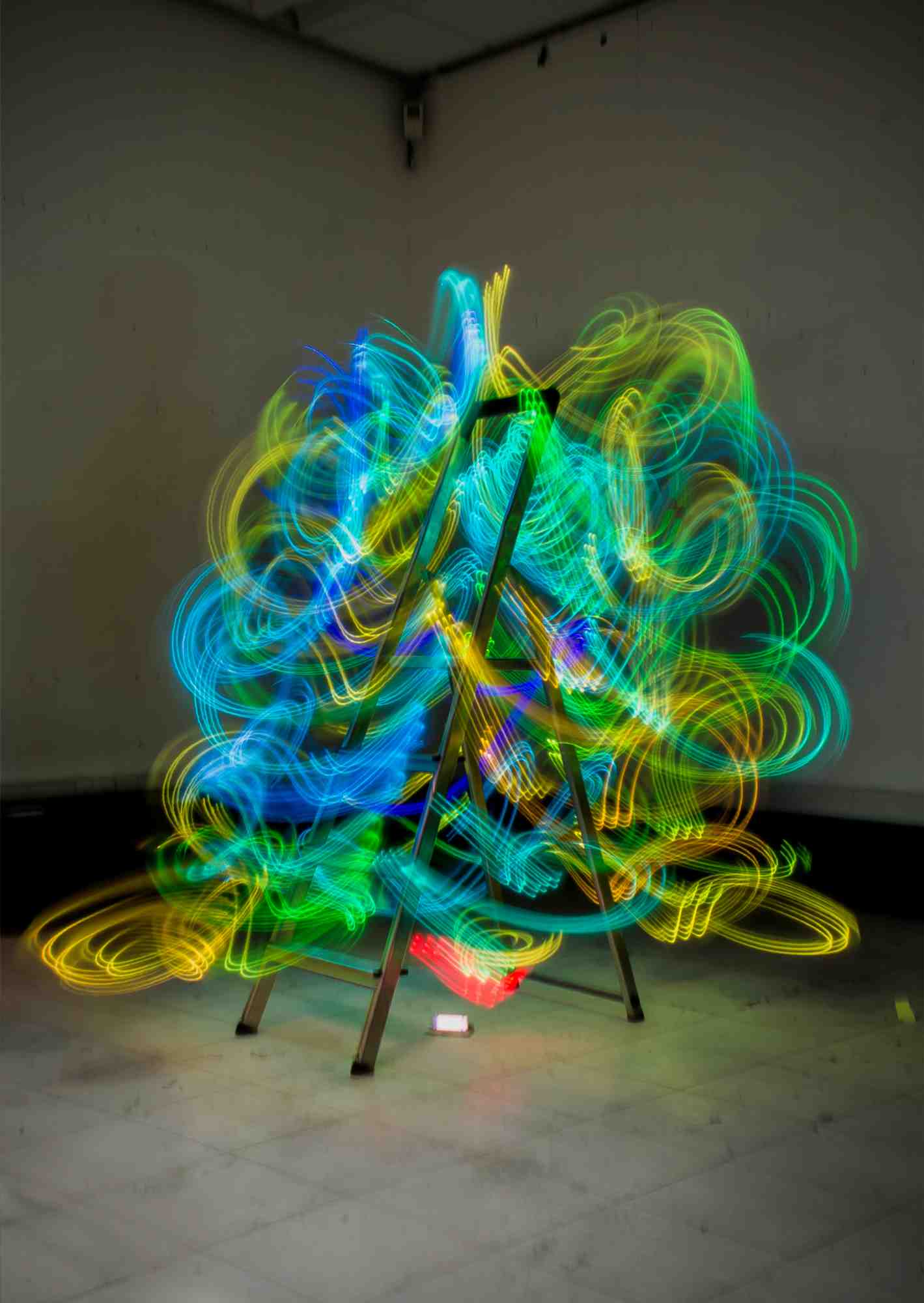 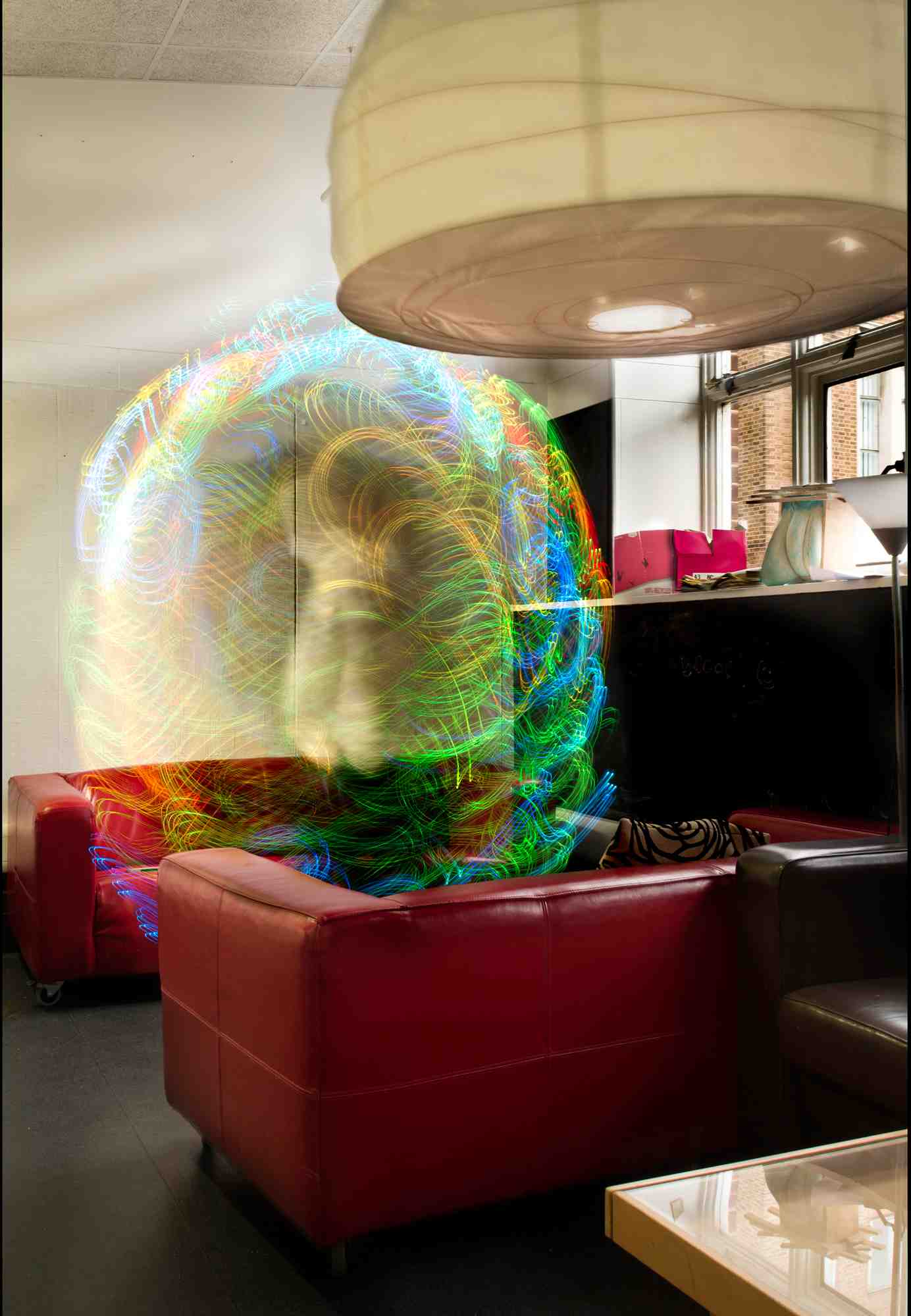 Wifi radiation in a lounge environment – the distribution of the colors suggest there are multiple sources of WiFi radiation. 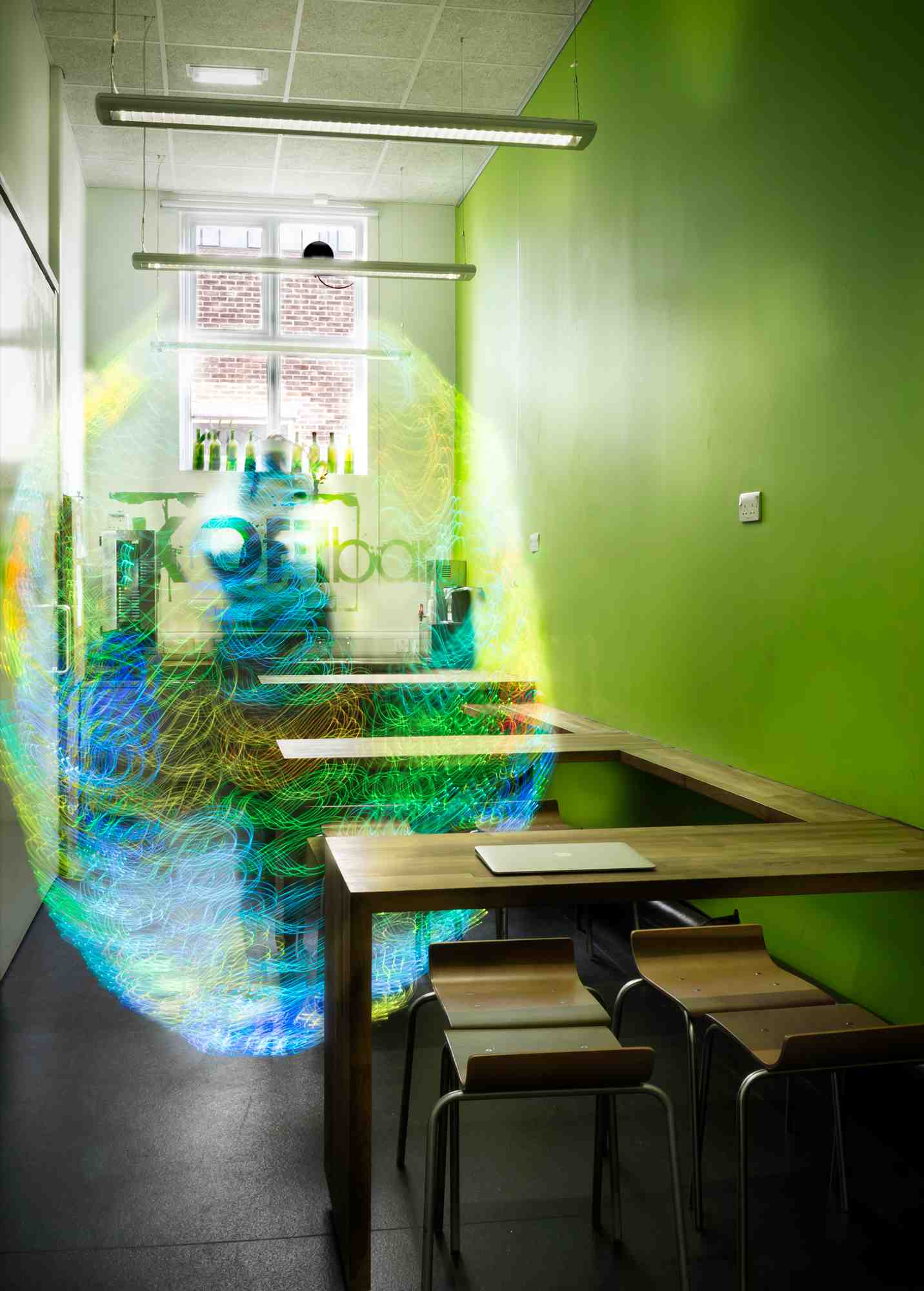 WiFi radiation signals in a coffee bar – the router is situated near the window. 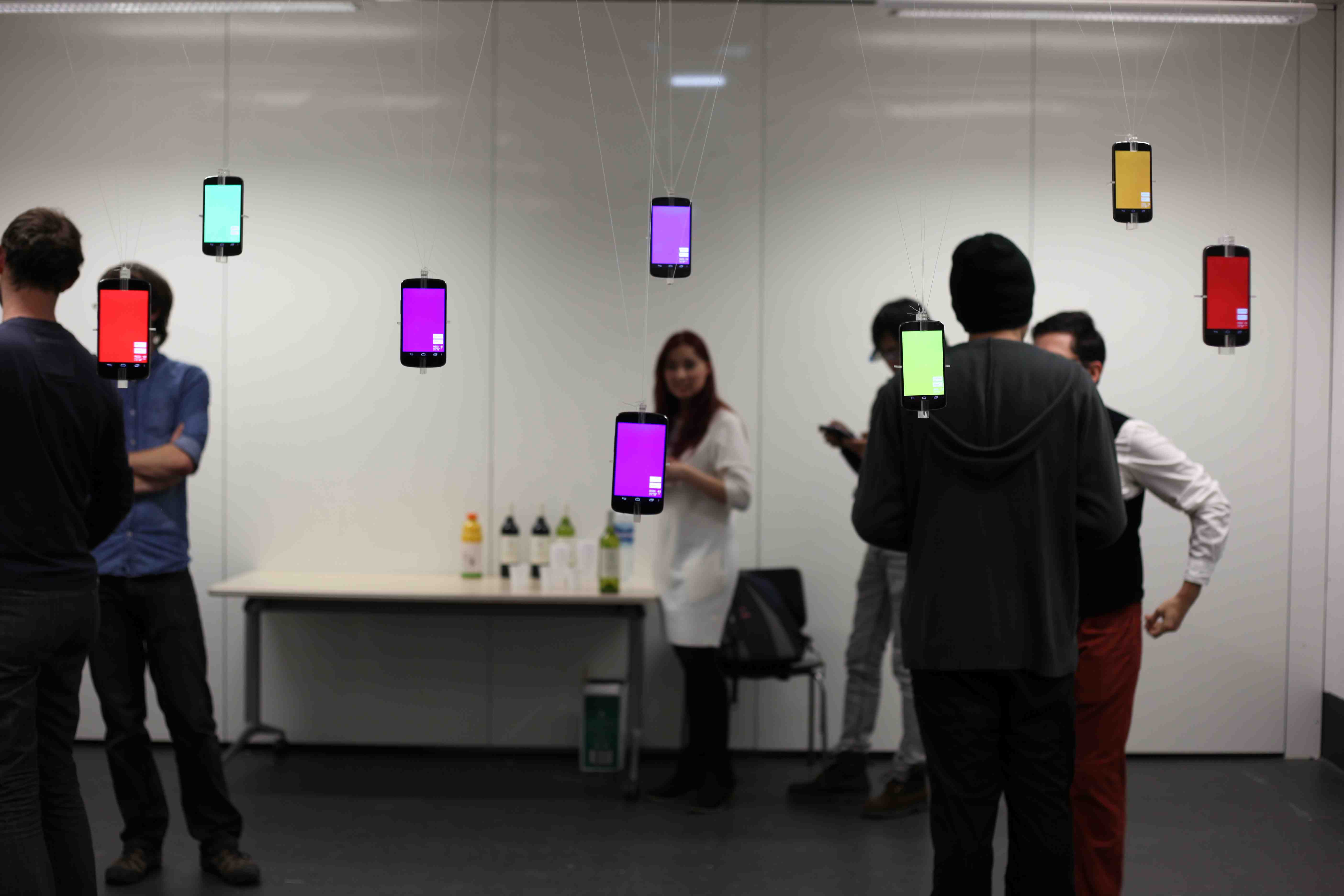 Smart phones with Luis’s Kirlian app activated – the phones are suspended showing that the WiFi radiation strength varies in different parts of the room.
How These Images Were Created
Luis used a DSLR camera mounted on a tripod. He took these pictures using long exposure photography. So he left the aperture open for about 5 minutes. Then he used what he calls an “Arduino based Kirlian device”. This is essentially a WiFi sensor connected to a simple processor connected to an LED strip. It’s the LED strip that makes the colors.
These pictures were created by Luis moving his device through the whilst taking the photo. Luis wore dark clothes to avoid being included in the photo.
What These Photos Don’t Mean
These images don’t show all the wireless signals in a given area. There are several things to understand here:
What These Photos Show
These photos show:
As Luis says, even just walking around the house will interfere with the propagation and strength of the field. Closing a wrong door, and a room can become a hotspot or a dead spot for wireless.
Free App
Luis has also created a free app for Android devices called the Kirlian Device Android app, which allows people to see the Wi-Fi on their smart phone. The app also emits sound, the more radiation present the higher the pitch.
The app can be downloaded here.
Can This App Replace An EMF Meter?
At the moment this app can only detect radiation in the 2.4 GHz range. Luis intends to create a future version which will detect cellular networks also. But even then this remains a crude way of measuring radiation. This app doesn’t replace an RF meter but if you’ve already got a smart phone it does allow you to detect radiation for free. If you’ve got kids with smart phones it can be a good way to make them aware of their exposures.
Luis is a student at Newcastle University in the UK.  These images are part of his Digital Ethereal project which aims to make the invisible visible.
Hat’s off to Luis for undertaking this project and sharing these images. But as pretty as these images are let’s not forget that these swirling colors let us see pulsed digital radiation (a.k.a electromagnetic fields) which thousands of studies link to adverse biological effects and a myriad of diseases and illnesses including cancer, brain tumors, infertility, DNA damage, suppression of the immune system and much more.
Share |
Previous Post
Next Post
comments powered by Disqus